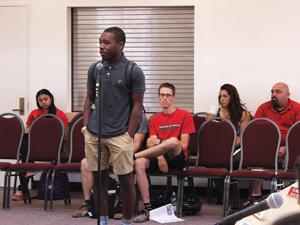 The Associated Students approved Marquise Foster-Johnson as senator for the College of Humanities on Friday, completing the 24-member Senate.

Foster-Johnson has a double major with journalism and liberal studies with a minor in political science.

One of his reasons for joining the Senate was the lack of diversity.

“There is a lot of the same type people with the same background,” Foster-Johnson said.

He realized the responsibilities of managing a $7 million budget would be a great experience and wanted to be part of the committee that advocates for Matadors.

Foster-Johnson went through an application process that consisted of several interviews with senators and chair of personnel to determine his eligibility, according to Sydni Powell, A.S. president.

Vacant seats are required to be posted on the A.S. website by the organization’s constitution, said David Crandall, A.S. general manager.

Crandall agreed with D’Alfonso’s idea and encouraged A.S. members to think about sustainability within the campus and the importance of supporting student life and funding with on-campus organizations.