Matador Nights was magical for those in attendance 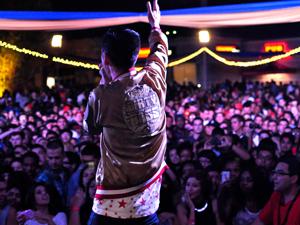 Matador Nights out did themselves with musical guests Kreayshawn, Baby Bash and Far East Movement on Friday, Sept. 7.

Students filled the USU square to its near capacity when Far East Movement stepped out onto the stage. The notable song “like a G6” took the students from Jafar to an accelerated Abu in seconds.

They also performed “Rocketeer” and their brand new single “Turn Up The Love.” A tribute to the Beastie Boys “Slow and Low” brought more buzz from the audience than any other moment.

“I can’t believe Far East Movement was on stage performing their tribute to Beastie Boys,” Mavueno gushed. “I definitely had more than three wishes granted tonight.”

Power 106 FM had D.J. E-Man partake in this event with warming up the crowd on Plaza Del Sol main stage.

Students designed their own fez hats, henna tattoos and Persian calligraphy. Fortune tellers, a magic carpet slide and an oxygen bar, which replaced the traditional hookah bar, were all a part of the “1,001 Arabian Nights” theme.

No matter where you were throughout the night, fez hats were seen on almost every student, making this semester’s arts and crafts project more memorable than last year’s mad hatter hats.

The night also included a high lifting swing carnival ride, a dubstep club, a photo booth and a variety of arcade games. The food stayed true to its theme with kabobs, hummus and mocktails instead of cocktails.

Belly dancers entertained students as they waited in a long line for their henna tattoos, Persian calligraphy and fortune telling. Even getting into the event took more than 30 mins.

“I forgot how to do Arabic dancing but I am now learning,” Al-Jeraiwi said.

With Matador Nights being exceptional with their food, activities and musical guests, who knows what will top it next semester.