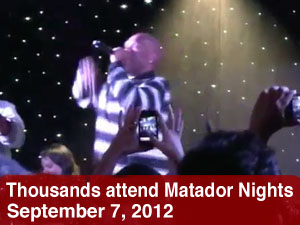 Matador Nights out did themselves with musical guests Kreayshawn, Baby Bash and Far East Movement on Friday, Sept. 7.

Students filled the USU square to its near capacity when Far East Movement stepped out onto the stage. The notable song “like a G6” took the students from Jafar to an accelerated Abu in seconds.

They also performed “Rocketeer” and their brand new single “Turn Up The Love.” A tribute to the Beastie Boys “Slow and Low” brought more buzz from the audience than any other moment.

“I can’t believe Far East Movement was on stage performing their tribute to Beastie Boys,” Mavueno gushed. “I definitely had more than three wishes granted tonight.”