CSUN Women’s Rugby back at it again 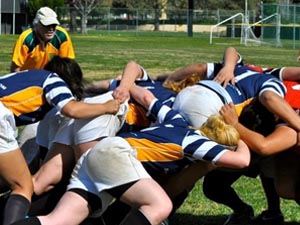 If you can’t be nice, play rugby.

A common slogan that sums up a Northridge club that most don’t even know exists, and hasn’t always been around.

CSUN’s rugby club came to an end after the 1994 Northridge earthquake took away their playing field, but junior CTVA film major Gillian Chance petitioned the athletic club board to revive it, starting in 2010.

“I thought I’d be able to go to school and not worry about having to juggle it with rugby, but after two months I realized I missed it so much,” Chance said.CSUN originally wasn’t playing nice and none of the girls were allowed to play rugby after their application, a process required of all clubs, was denied for the 2010-2011 season.

Not stopping with a ‘no’, Chance teamed up with other CSUN girls that wanted to experience rugby, to form the All Valley Black Roses.

Unable to compete in any league without being supported by a university, they created a schedule of matches with other schools unable to compete, going 9-0-0 in their first season.

Seeing how they were able to compete and represent the university, CSUN approved their status as a club for the 2011-2012 season, and gained approval necessary from all rugby teams in Southern California and Arizona.

Postings around school garnered the attention of many girls at CSUN willing to give a new sport a try, including sophomore kinesiology major Sarah McGee.

“Rugby attracted me because it was an all-women’s team that gets to tackle, so we can show that we are not always dandelions,” McGee said.

Making its return 17 years after officially ending at CSUN, the Northridge Women’s Rugby Club is now in its second season, participating in the Southern California Division of the National Division II collegiate league.

Starting with 30 girls last season, only two with rugby experience, their first season was one unexpected by all, except for the team and assistant coach Christina Alatorre.

“They performed leaps and bounds beyond what everyone expected. They looked like a team with three or four years’ experience,” Alatorre said.

Compiling a 7-1 record and winning the Southern California Division, the club advanced to the Sweet Sixteen tournament at Stanford and ended the season ranked 14th in the nation.

Playing, traveling, and practicing together has turned these teammates into more than that;
they are like family now.

“We are all super close, we live together, eat together, and train together,” said sophomore kinesiology major Monique Robles. “Its lifelong friendships with each other and girls from the other teams as well.”

Not needing experience was something that head coach Vincent Smith made sure to let all the girls know.

“Just show up, being willing to learn, and try your best,” Smith said.

Their season starts in January. Rookie camps will be held for all CSUN women interested in participating, starting Saturday, Sept. 15 at noon, on the North Field.