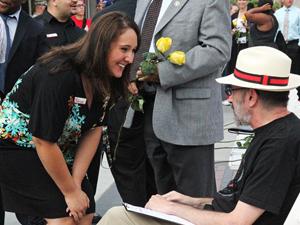 CSUN’s Veterans Resource Center officially opened with a ribbon cutting ceremony today across from Plaza Del Sol at 10 a.m. with 150 people in attendance, including the Navy and Marine Corps.

Yellow roses were handed out at the beginning to use at the end of the event in honor of the veterans to represent returning veterans.

“This is a tremendous resource for veterans as well as their independence,” Hammond said.

According to Hammond, the student veterans came up with the concept and they believed it would help their transition. The veterans worked with the board of administration.

Kevin Kidd, student veteran, was one of the catalysts for the idea of the center as well as David Arnett, Joe Castagna and Thia Nilawat.

Hammond said the organization will provide a safe place.

“There is a lot of bureaucracy you have to navigate through when transitioning from military to citizen,” she said.

Sabrina Lockey, board of directors chair, said the ceremony was beautiful.

“We represented all the branches in the military,” Lockey said.

Lockey suggested the student veterans utilize resources provided at the center and meet new friends. She is excited to see the veterans dedicated and involved.

Tower J. Hazard, peer mentor for the VRC, said the event was appropriate and long-awaited.

“It gives them formal ground and provides the next chapter for them,” Hazard said.

According to Hazard, laying the rose at the feet of the Matador is a Spaniard tradition and is the epitome of a symbolic act, he said.

Hazard wants to guide the veterans through the transition from military to civilian so they avoid pitfalls.

The veterans are pursuing their futures and students should welcome them, Hazard said.

Monteigne Staats Long, VRC coordinator, said it is important for students to care about the veterans because they make up a majority of the student body.

“Everyone can learn from them (about the diversity on campus),” she said.

Staats Long envisioned helping the veterans in three parts. She wants to help those coming from community college, military and provide career development for graduating veterans to get them acclimated into the workforce.

“I am honored to be a part of CSUN, to see the fruition come true made it a special day,” she said.

According to Staas Long, CSUN is a forerunner in the CSU system for the VRC.

She said what makes this center unique is that is was initiated and funded by the student union.

“We’ll see more eventually popping up at campuses,” she said.

Harry Hellenbrand, provost and vice president for academic affairs, spoke about his approval of the center.

“It’s a real honor to represent the university today. I look forward to the success of the center.”

According to Hammond, $120,000 was donated to the center from an anonymous donor and $67,000 was from the Campus Quality Fee.