Bastion is a world that needs rebuilding 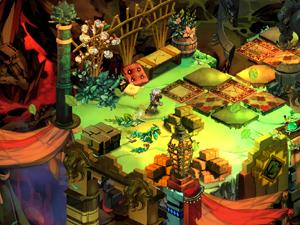 Nathan McMahon
A cracked and fractured world is something that slams into you not you into it.

Awoken in his bed by a grizzled voice from some far-flung spaghetti western, the hero of this story, simply referred to as “the Kid” inhabits that fractured world. It used to be known as

Caelondia but an event called “The Calamity” has destroyed it. The job of the player is to  guide the Kid and piece the world back together one level and mystical crystal at a time, with the Bastion as his hub from which he embarks on his many adventures.

The magic of this game lies solely in the aforementioned narrator, Rucks, that drives the plot through his observant and fulfilling dialogue. Each action you take is punctuated by a thoughtful quip. Often he speaks in riddles and veiled references about the world you are trying to rebuild. His vibe comes off as one of reluctant advisor and his insight is not the most informative.

Fall off the edge of the floating islands that make up the world, and Rucks will chastise you for making such an egregious misstep. Pick up an item that helps you in your quest and he’ll let you know what it may do or how it may help.

Do yourself a favor, and play using headphones as the poor quality speakers in an iPad do not do the game justice.

The art is beautiful and flowing. An animated painterly quality oozes out the sides of your iPad. So much flotsam and jetsam from the broken world is strewn about that one gets the feeling these generic crates and barrels, a staple of any video game, may originate from the world of Caelondia.

A variety of weapons and upgrades offer a cornucopia of carnage. From dual pistols and bows to machetes and hammers, the means to dispatch the enemies that have swarmed over the broken world are fun to implement, though there is some inherent frustration in engaging them. Often you’ll find yourself rolling and plummeting over the edge of the floating islands. It definitely degrades the overall experience.

While over the past few years we’ve seen our own world undergo drastic and dramatic shifts and tilts, Bastion seems to channel those relevancies into the genre of video games. It’s a worthy attempt but the biggest problem with the entire affair is that eventually the spit and polish wears thin and the repetitive gameplay frays at the ends of an otherwise solid experience.

The only thing that kept me going is the narration and even then, I didn’t finish the game and see the resolution to the story. Maybe that speaks more to my style of play but it’s worth noting.

The game originally came out a little over a year ago on Xbox Live but this version for iOS only works on the iPad and costs $4.99. If you are looking for something different to while the hours away you could do worse.