Creating a monster: the makeup and horror behind Universal Studios Horror Nights 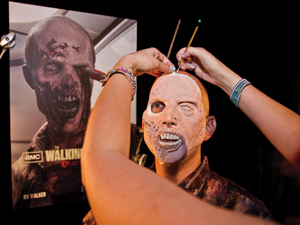 Using a mixture of branded horror and years of horror movie making experience, Universal’s Halloween Horror Nights is at the forefront of a horror industry that is always evolving, to paraphrase Creative Director John Murdy.

In its seventh year, Horror Nights will open on Friday, September 21st and continues on 19 select nights through Halloween, Wednesday, October 31.

With new mazes for the 2012 event, including AMC’s The Walking Dead, an adaption of Konami’s video game Silent Hill, Alice Cooper’s Gone to Hell 3D, La Llorana: Cazadora de Niños, and the original 1970’s The Texas Chainsaw Massacre, everyone will be able to find something that scares them.
“Each year we feel the need to top ourselves from the previous.” said Murdy, “We approach each year as if it’s the first event.”
While the mazes help set the scenes, what makes Horror Nights the premier event it is, is the utilization of makeup and masks on their “scare actors,” throughout the park.  The responsibility for coordinating all of this relies in the capable hands of Larry Bones, founder of Boneyard FX and lead Horror Nights make-up artist for seven years.

Working with a movie studio like Universal behind them helps make their effects more realistic.

“We work hand in hand with Universal’s Creative Department and makeup artists from the shows and movies we bring to life.” said Bones.

Conceptual artists start the process in the design department; their designs then get passed onto the Painting and Mask Department, headed by Kimber Parrish. “It runs like a film where all of us are working together as one unit on the project,” said Parrish.
The sculptors in the Mask Department cast and then mold each mask by hand, molding them out of foam latex.  Nearly 2,000 full facial prosthetics were made for the Walking Dead maze and terror tram alone.
The night of the event, hours before the event begins, make-up artists and the “scare actors” show up to get their makeup and costumes done.  Many of the actors will be in the chair for over an hour getting everything put together, but the artists jobs aren’t done just because the park doors have opened.
“We do touch-ups all night, with the actors sweating and moving around the prosthetics slip off or move around,” said makeup artist Samantha Ward while working on an actor transforming into the character RV Walker from The Walking Dead.
To get that realistic effect that Horror Nights is known for, every detail down to the way a costume is distressed is outlined in the conceptual art for each department.

“We follow the picture for a pattern on where to spray the blood, an acrylic paint and water mix, and how to distress the outfits,” said Aileen O’Brien, a Universal Dresser.
All of these departments coming together is something that really leaves an impression on Murdy.
“Each night is like an assembly line of horror, we can’t spend the same time on prepping as movies get too.” Murdy said.
When asked if he had any tips to survive this year’s event, Murdy only had two words for guests: “good luck.”  We may need it.