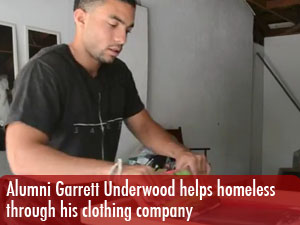 Christina Bennett
Garrett Underwood, 24, a recent CSUN graduate in kinesiology, has made it his goal to send out positive messages through the apparel he designs for his company Malachi Clothing.Underwood remembers how he came up on his inspiration like it was yesterday.

A man approached him outside the supermarket and asked him to buy drugs. Underwood, confused, asked the man why he’d assumed that he would sell drugs. “It’s what you are wearing; you look like you would sell drugs,” the man replied.

Underwood had a realization. The message he sent with his choice of apparel could be just as powerful as his choice of words. This was one of many moments that spurred the development of his company, an endeavor that started in 2006 while he was attending CSUN.