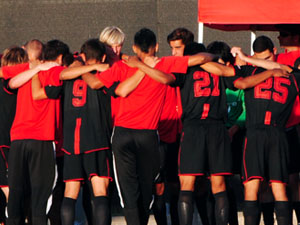 The men’s soccer team (2-3) welcomes Army (2-3) to Matador Field on Friday at 7 p.m. for the first home game of the season.It’s been a long and rough road so far in 2012 for the Matadors. CSUN played their first five games on the road, including two on the east coast.

“I forgot we had a home field,” said head coach Terry Davila jokingly. “It was a long start to the season but it’s going to be nice to sleep in our own beds the night before a game.”

Playing in front of family and friends could be a distraction, Davila said, but he’s hoping it will give his players the boost they need to end their three-game losing streak.

“(Home games) are precious because there are not that many left for me,” said senior goalkeeper Michael Abalos. “I’m trying to make the best out of them.”

Army is winless so far this year on the road but Davila knows the Black Knights will be ready when they visit Matador field Friday.

“This is a typical Army team,” Davila said. “(They’re) disciplined, intelligent, and every player knows his role.”

To get prepared for Army, the Matadors have been grinding all week in practice, according to senior defender and team captain Armando Gutierrez.

Abalos added that there has been “a lot of running” in practice this week.

The Matadors started the season with wins over Portland and American University, allowing only one goal in both those games combined, but have allowed six goals in their last three losses. The team has scored eight goals in its five competitions.

“We haven’t been doing the extra things to win games. We’ve scored enough goals to have a winning record,” Davila said.

Despite the three-game losing streak, the team is still upbeat and ready for the challenge that Army will bring, Gutierrez said.

“The first two losses were really close and could’ve gone either way. We have a lot of confidence in ourselves,” Abalos said of the team’s optimism.

Fittingly, the game against Army will be “Military Appreciation Night” meaning those that have an active or retired military ID card will get in to the game for free. The game will also be free to students with an active school ID card, as all regular season games are.