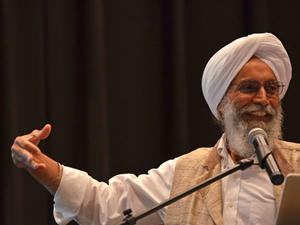 The Department of Religious Studies at CSUN held a lecture  on Sikh culture at the United States at the Northridge Center in the USU.

The main points of “From Stockton, California to Oak Creek, Wisconsin: Sikh Century in the United States” were about the history of Sikh culture, their gurus and people who gave birth to the Sikh community at the northwest part of India, the land called Punjab.

The speaker, Dr. Gurinder Singh Mann, the chair of Sikh Studies at University of California in Santa Barbara, also talked about the evolution and challenges the Sikh community faced during migration from the Asian lands to the U.S. and other countries.

Mann made a point that after 9/11 events, Sikhs were one of the main targets of violence and riots due to the stereotypes and wrong beliefs about their origins.

People think that Sikhs are Muslims for their attire.

“They always wear a turban because they never cut their hair,” said Dr. Phyllis K. Herman, professor of Religious studies at CSUN and coordinator of CSUN’s Asian studies interdisciplinary program. “This is an old tradition to have long hair, so Sikhs have to tighten it into the turban.”

The lecture explained who the Sikhs are, what they represent, where they come from and that they are not terrorists, especially after the massacre at Oak Creek, Wis., according to Herman.

“I didn’t know about the Sikh culture much,” said Michael Kamoloff, freshman political science major.  “I came to the lecture to find out who they are. The lecture was informative and I would also like to do a deeper research on this subject.”

According to Mann, during the immigration to the U.S., Sikhs were coming to a spiritually familiar place. They believed any land was for everybody under God. But they encountered religious misunderstanding while establishing their community here.  They had to have strength to fight for themselves.

“I was in Jerusalem, when I first felt the need to get people to know about Sikhs,” Mann said. “The world, the universe is the divine place and it is for everybody no matter who you are.”