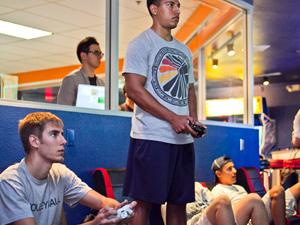 Ammons Smith
The FIFA Gaming Tournament hosted by the Games Room at the University Student Union took place on Thursday and used a 16-player elimination bracket to narrow down the three top players. Those players were Erick Bravo, Humaid Alsuwaidi and Cesar Morales.
Erick Bravo, junior student, played in this tournament last semester and lost in the first round. “It was disappointing because I didn’t play with the team I usually play with.” He competed as the country Barcelona instead of playing as Spain this semester.
Bravo decided to play again and won 1st place in the tournament after defeating five opponents. He embraced the competition that the tournament brings. “You get to play random people and test your skills.”
Bravo said his second game was the hardest. “It was the only time I scored one goal.”
Bravo has yet to receive a prize but he was told the host of the tournament would contact him by email.
Cesar Morales, sophomore student, entered this tournament for the first time. He made it to third place.
“The FIFA 12 tournament was a lot of fun to play because I really enjoy playing FIFA and playing against other great players adds a lot of motivation and intensity to the game.” he said. “I really liked playing against very good opponents because it makes the game so much fun to play.”
Morales said the crowd was great because they weren’t distracting the players but they were still able to acknowledge the crowd’s presence while playing.
Morales competed as Barcelona in every game he played. He played against three opponents but his hardest was the last. “My hardest opponent was the final one because I couldn’t seem to retain possession and he was really good at dribbling with his players.”
Morales is already looking forward to playing again when the next tournament arrives. “To win first place next time I will try to be more secure with my passing and to slow the tempo of the game down in order to play to my strengths.”
Delete Image
Align Left
Align Center
Align Right
Align Left
Align Center
Delete Heading