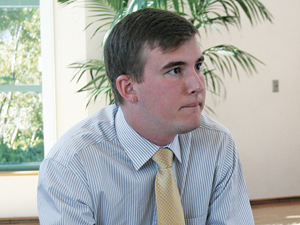 Associated Students Vice President Chris Woolett informed the A.S. body today, about a possible Cal State University board of trustees resolution that would increase some CSU students’ fees by up to several hundred dollars per unit.

Woolett announced in his weekly report that the board of trustees will discuss three fee increases at their board meetings next Tuesday and Wednesday.

The first is a “graduation incentive” that would charge students an extra $372 per-unit for those taken after 150 units; the second charges an extra $100 per-unit for a repeated course; and the third is a $200 per-unit fee for students who take more than 16 units in a semester.According to the Stephanie Thara, spokesperson for the CSU, these increases will only go into effect if Gov. Jerry Brown’s proposed tax initiative does not pass in November.

Though this information was available on the board of trustees website since last Friday, the A.S. senators did not learn about this information until today. Woolett learned about the fees through CSU Long Beach’s student newspaper, the Daily 49er which reported that CSU Long Beach’s Associate Students held an emergency meeting to pass a resolution in opposition to the fee increases.

One A.S. senator had a verbal reaction to the possibility of more fee hikes and no plans to oppose or support them was discussed.

“What is the reasoning behind the fee?” asked Senator Nelly Altamirano, who represents the college of business and economics.

Her question was directed toward Woolett, but he expressed that he did not know enough about the proposed fees to give her answer.

Senator Malek Al-Marayati, representing the math and science college, expressed that he had no response during the meeting because all the information was very overwhelming. However, he began researching the fees immediately after the meeting adjourned.

“I have a lot of constituents in the college of science and math who repeat courses,” Al-marayati said . “And I’m concerned with the extra fees (on those who take more than 150 units) because I’m a double major.”

Senator Talar Alexanian, who represents upper division students, said that though most of the senators did not voice their opinions during the meeting, many discussed the fee increases in their conversations afterward.

“I think we were caught a little bit by surprise today when we heard the news,”  Alexanian said. “I feel that all the senators have strong convictions about this because this not only affect their constituents, but them as students as well.”

Alexanian said that if passed, the fee increase for students taking 16-plus units would affect her constituency –students who are trying to get classes to graduate and move on.

“The third-tier tuition fee would have the most effect on my constituency specifically,” she said. “All of them are struggling to find classes and trying to get out of here and into the real world and start what they want to do with their careers. But it’s tough when these fees are increased on you, adding an additional struggle for you to break free and move forward in life.”

A.S. President Sydni Powell said that the senators would more than likely discuss these fees with President Dianne F. Harrison at a luncheon taking place at Harrison’s house tomorrow. She said that it would be up to the senators’ consensus to decide whether or not A.S. would take a stance on the possible fees.

“Now that VP Woolett has given them some information about it, it’s gonna be my challenge for them to speak up to other students,” Powell said. “I don’t want to always be the one to always put forth things on the agenda.”