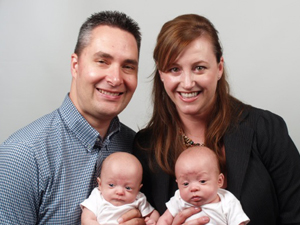 When Dr. Shane Frehlich, chair of the Kinesiology Department at CSUN, was diagnosed with a rare form of leukemia in May, he thought it was a mistake.

Frehlich thought leukemia was a genetic disease, and as a man with no family history of the cancer, he didn’t believe the diagnosis. But he was not going to take any chances.

He and his wife of four years, Dianne, noticed red spots on his skin. He assumed they were just an allergic reaction to something he had eaten or touched. It was not until the spots grew larger that his wife suggested he see a doctor. After visiting three separate dermatologists, he was referred to an oncologist, who specialized in different forms of tumors, and he was given a biopsy.

“It was a surreal experience,” Frehlich said. “I was in denial at first, but after it sunk in, I started shifting my mindset on what I needed to do to beat this disease.”

Because Frehlich does not have a match within his family nor in the Be the Match registry, which has over 10 million possible stem cell and bone marrow donors, the kinesiology department started a bone marrow drive for him.

The event will be held Tuesday from 10:30 a.m. to 4:30 p.m. at Redwood Hall with staff members present from the Duarte City of Hope hospital, which runs the Be the Match Registry for Southern California and the Central Coast.

“The drive is a great opportunity for people to learn about the Be the Match registry,” Vrongistinos said. “Most donors end up being college students or recent graduates. We hope to increase the chances of people having matches on the registry.”

Leukemia, a broad term for cancer that affects the soft, spongy marrow in certain bones and the production of white blood cells, affects about 300,000 men and women in the U.S.

Spots on skin are usually signs of late-stage cancer, but as Frehlich puts it, his case is backwards.

“There’s nothing in my marrow. It was just on the skin so my case is a lot more rare,” he said. “I’m hoping this rarity could be a good thing.”

Before Frehlich was diagnosed, he was on paternity leave. On Jan. 25, Dianne gave birth to twin boys, Max and Miles, but they were three months premature and had to stay in the hospital for a few months.

“It’s been a hard year for us. The babies came home not long before Shane was diagnosed,” Dianne said. “But they were so strong in the hospital, and that gives me hope that Shane will pull through this.”

In June, Frehlich went on medical leave to start chemotherapy at Ronald Reagan UCLA Medical Center. His doctor recommended four rounds of chemotherapy. Each round is a month-long process.

Frehlich endures the chemotherapy treatment for one week and then he goes through three weeks of recovery at the hospital. He must stay in a sterile environment because the treatment devastates a patient’s immune system. He can then return home, for two to three weeks, to be with his family before he has to go back to the hospital for his next round.

“My family has been my motivation to keep going and get back to them,” he said.

While he was recovering from his most recent session, he had an encounter with two individuals: a 20-year-old Latino named Angel and a 20-year-old African American named Tyrone.

Angel had recently run a marathon and had stopped by the ward to say hello to the staff. He had been lucky enough to receive a stem cell donation from a match found in the registry.

As for Tyrone, the first and last time Frehlich had seen Tyrone he was frail and could barely walk. Frehlich saw him out in the hall trying to walk around the ward. Frehlich offered to walk with him. He learned that Tyrone was still waiting for a stem cell match on the registry. The next day, Tyrone’s ward had been cleaned out and nurses would not tell Frehlich what happened.

“Although these two young men intersected with my life for only the briefest of moments,” he said in a letter to his department Sept. 13. “I think about Angel and Tyrone often. Their lives illustrate just how important the registry is. Unfortunately, for patients like Angel and Tyrone, there are nowhere near as many donors as there are for Caucasian patients.”

About 90 percent of Caucasians can find a match within the registry while only 20 percent of Asians, African Americans, Native Americans and mixed races are represented in the registry, according to Joyce Valdez, Community Outreach Specialist at City of Hope hospital.

Valdez will be part of the bone marrow drive Sept. 18, and will provide information on the registry, as well as forms for participants to fill out.

“The people at City of Hope are great,” said Vrognistinos. “They’re really passionate about their work. We hope a lot of people will benefit from the drive.”

The bone marrow drive doesn’t require any blood donations, but rather participants will be given a small self-swab kit where they will rub a cotton swab against the inside of their cheeks and then place them in a sterile vile. The swab is used to gather tissue samples within the cheeks that may show if participants are a match for Frehlich or any of the thousands of patients waiting for donors.

Frehlich goes in for his third round of chemotherapy in about a week and his last is scheduled for sometime in early to mid-December.

“Everyone here at the department loves working with Shane,” Vrongistinos said. “We hope we can have him back during the spring semester.”