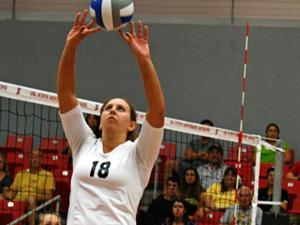 The CSUN women’s volleyball team went into the Lone Star State and came back with some hardware.

The team won the Rice Invitational without losing a single set, beating three teams by a combined score of 9-0.

Stepping in for injured starter Natalie Allen, Graff led the Matadors with 14 kills against their first opponent, the host Rice Owls.  Head coach Jeff Stork was pleased with Graff’s effort.

Gedryn had seven kills, seven digs, three blocks, and 34 assists as she coordinated the CSUN offense and helped on defense.

Nancy Cole led the Owls with 12 kills in the losing effort.

The Matadors defeated Rice easily in the first set, but had to rally to win the second set and hold off a Rice rally in the third set before claiming victory.

“We did so many things well against a very good team today,” said Stork. “We played Rice a couple of years ago and were a little concerned about their speed of play but we’re a much improved team and we handled it well today.”

In the second game of the tournament, CSUN defeated Texas Tech in straight sets to keep the streak alive.

Graff once again led the offense with ten kills while the middle blocker tandem of Casey Hinger and Sam Kaul combined for ten kills and eight blocks.

“We’re doing good things with our blocking schemes right now,” said Stork. “Because of our blocking, we’re getting easy digs. We’re also serving in most of the time and were not committing hitting errors which keeps the pressure on our opponents.”

Much like the Rice game, Texas Tech put up a fight against CSUN, leading the first set by as much as five before the Matadors hit the gas pedal and rallied for six straight points.  The third and final set was the tightest of all until CSUN pulled away at the 16-point mark for good.

As for the Red Raiders, Lydia McKay led the team with 11 kills in the loss.

Hours after defeating Texas Tech, the Matadors plowed through their final opponent, the Houston Baptist Huskies.

Once again, Graff led the offense with ten kills while Ortiz had 16 digs to anchor the defense.

Hinger had nine kills to lead the CSUN middle blockers while Kaul added a solo block and three block assists.

The Matadors return home to begin Big West conference play with a showdown against powerhouse Hawai’i at the Matadome on Wednesday.