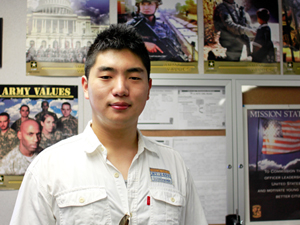 Born in Seoul, South Korea, 23-year-old Won Gi Lee traveled a large portion of the world before settling down in Northridge.

With his mother and military stepfather, Won Gi Lee was kind of an Army brat who lived in Japan, New York, Tennessee and New Jersey.

Lee began going to CSUN in 2007 following the positive feedback of friends from South Korea who were enrolled.

There was little to no culture shock for Lee, having lived in many different areas of the United States.

“I think my English was better then than it is now,” Lee said laughing. “While living in the naval bases in Japan, I would talk with a lot of American soldiers in English and get a lot of practice.”

While previous stays throughout the United States only lasted a few months to a year, due to his stepfather’s career, Lee intended to stay at CSUN and obtain his bachelor’s degree before moving on.

Due to the minor language barrier that still existed between him and his studies, Dr. Aki Hirota, a professor at the department of modern and classical languages and literatures, informed Lee of being able to study abroad.

He jumped at the opportunity and enlisted to study in Kyoto, Japan, for one year.

At Kyoto, he recalled meeting different types of students from different parts of the world studying alongside him. There were students from Africa, Europe, Middle East, Asia and South America.

“Studying abroad was the best experience I ever had,” Lee said. “The people you meet are so different from Americans here. Everyone was so positive and welcoming.”

The experience changed him.

Returning to CSUN, Lee changed his major from political science to modern language and cultures in Japanese.

After joining the CSUN’s ROTC program in 2007 and studying in Japan, Lee graduated in 2011, and is currently talking with military recruiters.

“The military has been part of my life since I was born,” he said. “In my first life while traveling with my family and now because I believe it makes people better.”

Surprisingly, Lee said that when he lived in South Korea, he feared the law that required all male citizens to serve the Army for a few years.

In the long term, Lee wishes to attend his dream university for a master’s in Japanese political science, preferably in Stanford or Harvard.

He hopes to eventually serve his country as a diplomat, making a positive difference in the lives of the many people like the ones he saw in his travels.