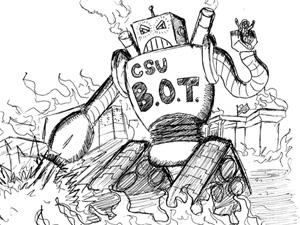 On Wednesday, the Cal State University board of trustees will vote on a series of resolutions that could raise tuition, including one that would raise tuition up to $372 per-unit for some students. These resolutions include immediate tuition hikes if Gov. Jerry Brown’s Proposition 30 fails. However, the per-unit fees may go into effect regardless.

While our staff was aware of the potential tuition hikes, we only recently learned about the CSU Finance Committee’s last resolution, which proposes three new resident undergraduate fees starting Fall 2013. We are opposed to all three additional student fees part of the CSU’s “contingency” plan because they will further push an accessible, affordable education out of reach for California’s students.

The CSU system claims that these three new fees are “intended to increase student access to classes and reduce time to graduation” and anticipates $35 million in additional revenue annually. In reality, these extra costs will impact students as punitive measures and only make obtaining a bachelor’s degree much harder for students already participating in academia.

These fees target students who are figuratively clogging the CSU’s pipes, and those who are making it more difficult for other students to enroll in classes. They are supposed to give students an incentive to more carefully decide their majors, work harder to pass classes and make the distribution of classes more fair among undergraduates.

The intention behind these fees are understandable. If they applied to incoming freshman they could be considered a graduation incentive – albeit a harsh one – because students would enter the CSU system understanding that they will get by unscathed if they take 15 units a semester and do not fail any classes.

However, the fees would unfairly punish existing college students who have already failed a course, or who are in the position to need to take over 150 units to graduate or were planning on taking more than 16 units per semester their senior year.

The Graduation Incentive pushes students to graduate faster, but the Third-Tier Tuition Fee could prolong their senior years due to the extra cost. Imagine a senior who needs 18 units to complete his or her major and could do so if all units were taken in one semester. Under the new policy, this student would need to pay an extra $400 just for those two units.

“No student shall be assessed more than one of the three… fees for the same course,” according to the Finance Committee’s agenda.

However, Stephanie Thara, a CSU board of trustees representative, said that anything could change between now and tomorrow. That means that the board of trustees could make all three fees applicable to one course. In a worst-case-scenario, one could pay an extra $2,016 for a three unit class, making that course extremely unappealing for any student.

Even just one of these fees on any course would amount to hundreds of dollars that many students do not have. The CSU is trying to generate money on the backs of students, however, no students were consulted on policies that will affect only them.

According to Thara, the per-unit costs were determined by CSU budget and finance staff by conducting “a review and analysis of different figures” and by consulting CSU “stakeholders” and “constituencies” to choose the most appropriate amounts.

This is revealing of the attitude that the state and the CSU board of trustees have towards us as students; we are not considered an important stakeholder or constituency by our own education system.

The only way that our government and our administration will take our concerns seriously is if we take our right to an affordable education seriously. We may not be the richest constituency, but we are the biggest stakeholders in this institution.

If we engage with our elected representatives by writing letters, calling their offices and attending their meetings, the people in power will understand that we are not just numbers.

The CSU board of trustees will vote tomorrow on these measures. Be there and show them how important students really are.