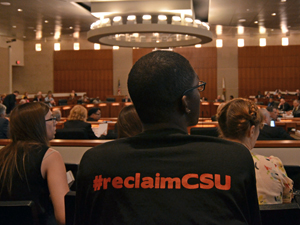 LONG BEACH—At the CSU board of trustees meeting Tuesday, the finance committee passed two resolutions, both contingent on the success or failure of Gov. Jerry Brown’s Proposition 30.

The two approved resolutions state that a rollback refund of the most recent tuition hike will be implemented if Proposition 30 succeeds, but, if it fails, would create a new tuition hike of 5 percent – or $150 per semester – beginning January.

The third resolution, which would have introduced three news fees – graduation incentive fee, third tier fee and course repeat fee – in the 2013-14 school year, has been postponed until the November board meeting after the election. It was also amended to include a report on the fees’ impact on student behavior at the end of Spring 2014.

Wednesday, the first two resolutions will go to the entire board for an official vote.

The board discussed all budgetary resolutions at length yesterday, asking for clarification on contingency plan details and hearing public comments.

Chancellor Charles B. Reed outlined both scenarios the CSU will face in the fall. As Brown has announced, the CSU system will experience a $250 million trigger cut if the proposition does not pass.

In response to this, Reed stated that the 5 percent tuition increase would garner $58 million per semester to help relieve some of the cut.

However, if the proposition does pass, it will allow the CSU to refund students the previous 9 percent tuition hike percentage, or about $250 per semester. It also guarantees $125 million in support from the state for the 2013-14 year.

“On the positive side, if Proposition 30 passes, then I think there will be some light at the end of the tunnel,” Reed said.

About a dozen students viewed the meeting from the crowd, some booing from their seats and shouting at board members to reconsider the fees associated with the third resolution.

Miguel Garcia, a student at CSU San Bernardino, approached the board during public comment to specifically address the graduation incentive fee, which proposes to charge more for those who have already completed 150 units.

He asked the board to consider students like himself who may change majors and accrue more units for choosing a different path.

“I don’t feel like you should punish students for going in a different direction,” Garcia said. “Why do students have to bear the burden of this crisis?”

Lupe Garcia, a member of the board of trustees, stated to Reed that if the purpose of it was to incentivize different behavior from the students, it might need additional review.

“Is the goal changing behavior or increasing revenue?” Lupe Garcia asked. “Increasing fees to modify behavior shouldn’t be our first shot out of the gate.”

The board also discussed and approved a motion to amend the resolution to include a report on the effects of the fees on students’ graduation and course repeats.

Board member Roberta Achtenberg started a motion to delay the resolution until further review, which was seconded by Student Trustee Jillian Ruddell.

The board also ratified a variety of agreements between the CSU and employee associations, including a collective bargaining agreement with the California Faculty Association.

Two years in the making, the CFA’s contract will run through June 30, 2014 and open up discussions for future salary increases. The CFA will also withdraw its proposed strike.

“This is not a permanent blueprint going forward,” said Kevin Wehr, CFA representation chair. “But this gives us a way to move beyond this for now.”