Stan Lee’s Comikaze was not worth the wait or price 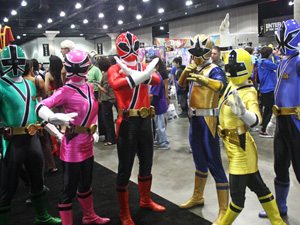 Stan Lee’s Comikaze took place in Downtown Los Angeles. It had been advertised all over the city and people responded, possibly too many. The event took place on Saturday, September 15, 2012 and Sunday, September 16. The over-hyped event took place at the LA convention center. This marks the 2nd year the event has been put on and it was filled with far too many flaws.The convention was expected to start at 10 AM and I arrived at noon. Parking was $15 and the parking structure was filling up fast. Tickets were available for purchase online weeks before the event. I took it upon myself to buy tickets ahead of time to avoid having to wait in any line at the actual event. This proved to be unnecessary because even with an advanced ticket, the line to get into the LA convention center wrapped around the entire building. As I walked to the back of the line in 100 degree weather, I immediately began to regret my decision to attend this event. People were clearly upset and I only saw three security guards helping with line control.

I stood outside of the convention center for one hour and 30 minutes. At this point, kids were crying, adults were becoming vocal about their frustrations and I just wanted to go home. After almost two hours, we enter the convention center, only to find out there is another line to get our wristbands. We slap them on ourselves and attempt to have a good time by walking the convention center floor. This is a mash up of artists, gamers, vendors and panels. We walk by tables set up for Dungeon and Dragon players, a display of almost every Marvel character figurine you can think of and of course, vendors selling comic books and t-shirts.

After checking everything out for about 20 minutes, we notice a commotion in the near distance. We head over and Stan Lee is talking on a stage. Of course, everyone has stopped what they are doing, taken out their cameras and crowded around this one stage. It instantly became an issue, with massive amounts of fans screaming, flashing their cameras and pushing innocent bystanders to get a closer look. I decided it wasn’t worth being pushed over and headed away from the stage.

I walked around for another 10 minutes and after being hit in the ribs pretty hard by someone who wanted a closer picture of a  man in a Storm Trooper costume, I decided this wasn’t worth my time. I wanted my money back. I had wasted almost 2 hours outside, only to get inside and be bored and injured? I have attended Comic-Con in San Diego the past 3 years and I attended Wonder-Con in Anaheim in March. The founders of Comikaze need to take notes from these conventions with more experience.

Although Stan Lee’s Comikaze is only in its 2nd year, I truly hope that they realize how many real fans were upset this past weekend. Nothing about the experience was worth it and by the look of their Facebook page, others would agree with me.

Fred Kaufmann wrote, “Very poor planning for this event. There was no reason why people that pre-bought their tickets had to wait in line up to two hours in heat that was over 100 degrees.”

Kenny Johnson wrote, “I didn’t leave because of the heat (alone). I left because I didn’t want to wait in a 2 hour line with my son in the heat. I also left because I saw people cutting in front of me by the dozens with no staff stopping them. I left because I bought my tickets ahead of time and did not expect to wait 3 hours just to get in.”

Hopefully by 2013, Stan Lee’s Comikaze will have gotten their act together.