Theater review: the Book of Mormon 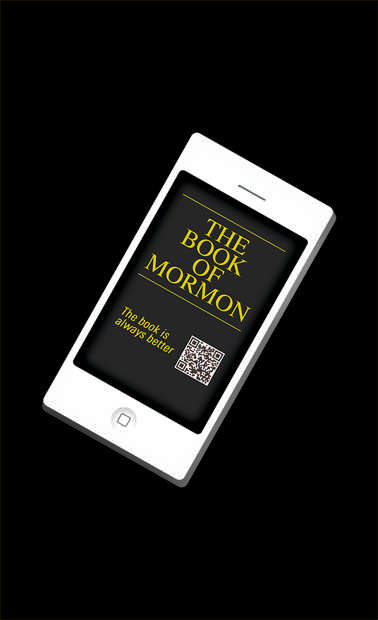 Many people have said that it is the job of art to imitate life. In today’s fast-paced and hyper-reflexive world, it is now the job of life to imitate art as well.

And so, The Church of Jesus Christ of Latter-Day Saints—that’s right, the Mormons—have bought three ads in the Book of Mormon theater program. After you’ve watched two hours and 25 minutes of South Park satirists Matt Stone and Trey Parker having their way with Mormonism (a church they have called “Dumb, dumb, dumb, dumb, dumb”), well…if you’re interested in learning more about Mormonism, you can. There’s a QR code right there.

The story follows two young Mormon missionaries sent to Uganda: Kevin Price, a high-achieving true believer who can seemingly do no wrong, and the bumbling Arnold Cunningham. When the Mormons have no luck converting the natives to the faith, it’s suddenly the bungling Cunningham who becomes the star. He starts winning the Africans over by infusing Mormon mythology with some of his favorite snippets from Star Trek and Lord of the Rings. The combination gets the Ugandans to buy in, but it’s also because Cunningham’s cockamamie narratives also address problems the natives have, such as AIDS and dysentery.

Comedy is the order of the day in this musical that’s won nine Tony Awards (“Spooky Mormon Hell Dream” might be worth the price of admission alone), but the play brings a bit of heart at the end. Stone and Parker tell us that there is always value in something that makes us want to do good, and makes us feel comfortable—even if it is “dumb, dumb, dumb, dumb, dumb.” The theme plays in to what Stone and Parker have said many times—that Mormonism sounds like a bunch of crazy, made-up stories that ultimately do no harm, and perhaps a bit of good. In that, Arnold Cunningham’s embellishments can hardly be seen as any kind of sin.

And the Mormon’s ads? They’re very self-aware. The Mormons obviously know they’re in hostile territory, but with a curious audience. One of the ads uses the old adage, “The book is always better.”

The play is a good start. If you’re interested in a heavy dose of comedy with a dash of compassion and a bare minimum of theology, this is the Book of Mormon you want.

The Book of Mormon is at the Pantages Theater, corner of Hollywood and Vine, through November 25. Tickets $35-$210 at www.BroadwayLA.org