Current A.S. members get advice from past members 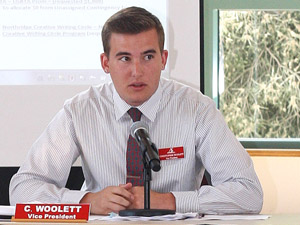 Past Associated Students members attended Friday’s meeting to advise and talk to current members about what issues affect students.

“The work you do here today is real stuff, and it has real dynamics, real work, real value to your community,” said George St. Johns, A.S. vice president for Valley State College (CSUN’s former name) from 1966-67. “That’s the way I viewed it and I hope you view it the same way. I also hope you don’t get caught up in it to a point where you think your ideas are omnipotent. They’re not. They’re going to change.”

Both former and current A.S. members also compared the issues facing their generations.

Joe Perret, a former A.S. adviser in the 1960s, said among major concerns during his time were tuition, burning down buildings, free speech, the Vietnam War and student fees.

Current A.S. members chose communication between the student government and student body, tuition and classes, parking and getting students to vote as today’s most pressing issues at CSUN.

Senator of Education Sarah Garcia cited that only 8 percent of the student population voted in last semester’s A.S. elections.

“I think a lot of students want us to be able to handle the tuition situation and classes,” said Chloe Thornton, senator of Health and Human Development. “I think we get reprimanded that we don’t do anything because people don’t understand what we do on this board. So we’ve been getting lashed out against quite a lot this past year.”

John Cagle, A.S. president from 1965-67, said part of the challenge the student government has today is to engage its community through various events and activities, given that most CSU students hold jobs and leave campus right after their classes.

Apart from the visit from alumni, A.S. Vice President Christopher Woolett reported on how the failure of Proposition 30 would affect CSUN according to Thursday’s CSU board of trustees meeting.

“If Prop. 30 fails, there are about three areas on our campus that will be affected: engineering, music, health sciences,” he said. Architecture is the only major exempt from this, but an estimated 3,000 students will be affected, he said.

Whether Proposition 38 passes or fails, if Proposition 30 fails there will be an added $150 to CSU students in the spring 2013.

The student government also allocated $700 to Matadors for Equality from the assigned contingency fund.

Woolett also said A.S. is looking into an online open forum for students who are unable to attend meetings on Friday. This would provide them a way to address the student government, he said.