One Amazing Community to spread message of hope 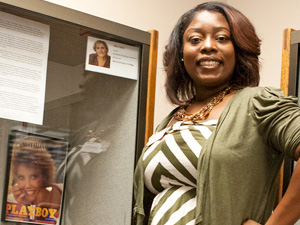 Christina Bennett
One Amazing Community, an event hosted by the CSUN volunteer group Unified We Serve, will spotlight a diverse panel of speakers whose life stories inspire the community and encourage connections with others, according to Latanza Price, program assistant for Unified We Serve.

The group of 11 speakers will spread the message the finding ways to conquer undesired circumstances is a matter of resolve.

‘The value of selflessness’

Luda Gogolushko, 24, understands living with a disability, but it is clear it does not disable her.

Like other students, she attends class and is dedicated to her education. However, her routine includes planning out her day the night before because daily energy levels are unpredictable when living with spinal muscular atrophy type III, which causes the weakening of the muscles and spine, and decreased endurance.

“I’ll get ready the night before just so I don’t have to bump into the wall to get stuff. [There’s] definitely a lot of planning for me,” Gogolushko said. “Although I may not be able to walk or run, that doesn’t mean I can’t do everything else.”

Only able to walk until age 9, Gogolushko began experiencing more severe symptoms of the neuromuscular disability as she got older, using a power wheelchair in eighth grade.

Despite her condition, she earned her bachelor’s degree last May in recreation and tourism management, and will finish her graduate degree this May in communications studies.

“It breaks my heart to know the things people have gone through,” Gogolushko said. “Whatever I can do to make people’s lives better and easier is definitely something I tell myself everyday. Selflessness is something I value.”

One Amazing Community is trying to relay this message of perseverance, Gogolushko said.

“The one thing that keeps me going: I tell myself, ‘Don’t give up now, you might be a moment away from a miracle,’” Gogolushko said.

‘Finally, a purpose’
Having a resilient mentality is familiar to CSUN student Theodore Chavez, 22, double major in linguistics and deaf studies.

When Chavez was 8, he came home from school one afternoon eager to deliver a school project he worked on for his parents, particularly his mother.

His family was gathered at the house, but his mother was not there and did not return home that night. He slept for days on the floor of his room waiting for her.

He lost his mother to right-sided heart failure, sending his world spiraling out of control. He only became aware of his mother’s death at her funeral, when the casket was opened.

After his mother’s death, his sisters ran away from home. His father developed a cocaine addiction, and he came and went as he pleased. Chavez was left to fend for himself.

Numbing the pain was not easy. His mother’s death left emotional wounds, and to cope with the pain, he began cutting himself.

“At this point in my life, I had not dealt with my mother’s death,” Chavez said. “It was something that was pushed to the backburner and never brought up. When it was brought up, I was always the person being talked to about it. I was kind of like the punching bag of the family.”

The family had a brief time of peace when Chavez’ father and sisters reunited when his dad moved to Bakersfield. But the reunion didn’t last long Chavez’ father ended up in the hospital and was declared brain dead.

“It’s OK to have problems,” Chavez said. “It’s OK to sit in your room at night and cry. Just know that you’re not alone.”

It’s not about the size of your problems or comparing yourself to others, Chavez said, because problems can’t be measured.

Now a graduating senior at CSUN and active in Kappa Sigma fraternity, he has found a loving brotherhood that left him wondering why he waited so long to get involved.

A conversation Chavez had with an aunt gave him new perspective on his life.

“She said, ‘God didn’t put you through this on accident. God’s not up there waving a wand saying, ‘Oops sorry, yeah you lost your parents.’ God’s saying, ‘This is going to happen and I promise there will be a way to use this in good ways.’ That’s exactly what I feel about what’s about to happen on Monday,” Chavez said. “I feel like I’m finally seeing a purpose to everything. I’m finally seeing why I’ve been through all this stuff.”

One Amazing Community will be partnering up with four organizations throughout the academic year including Habitat for Humanity, Operation Gratitude, Casitas Care nursing home and the San Fernando Valley Rescue Mission.

These speakers, along with the ten others, will share their stories tonight at the Oviatt Library from 6-9 p.m.

Unified We Serve hopes tonight’s event will shed light on the interconnectedness of the CSUN community and the opportunity for enrichment and personal growth through the embrace of others.

‘Transitioning to the real me’

Cadence Valentine, 32, psychology major and queer studies minor, is an advocate for the transgender community at CSUN who tells her personal story of discovering her true self.

Looking back, there were clues she did not identify with the male gender she was born with and that the occasional cross-dressing was about more than just wearing makeup and women’s clothes. Before transitioning, she knew that if she remained a man, life would have been miserable.

“I put it all on the line. I knew that it was either a source of transitioning or ending it (committing suicide),” Valentine said.

Forty-two percent of those who have trans-identified at some point in their life think about or attempt suicide, according to Valentine.

Although the notion seems silly to her now, it was a reality she felt then — especially over whether or not her friends and family would accept her.

“[I had] self-doubt if they actually would love me if they knew my secret … my mind went to some pretty dark places,” Valentine said. “Going through that process [transitioning to a woman] and getting the reactions from people, and speaking my mind, and having people more judge me on my actions, and my intellect, and my openness, and eagerness to learn as opposed to some sort of societal contract of what is gender … that gave me the impetus to speak.”

Involved with organizations on campus including the Pride Center and Matadors for Equality, Valentine is working toward achieving equity for the transgender community.

She is advocating for language in discrimination policies to protect gender identity, health coverage on campus to include transgender related care and changing the Information Technology department’s policies about updating student information to reflect their gender identity.

“I know it’s going to be a lifelong involvement [helping the transgender community]. I see it as a calling, it’s not career or anything like that,” Valentine said. “Does this mean that I will pretty much live my entire life as a trans-woman as opposed to a woman that happens to be trans — maybe. But if that cost is that it be the benefit of educating people, creating allies, creating awareness, pushing for equity in the system then it’s worth it.”