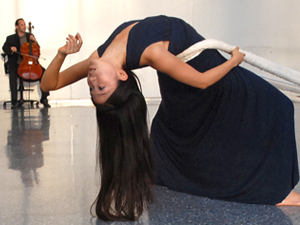 At most concerts the audience enjoy the music while the artists are doing the work. This was not the case at String Theory’s “Composition of Sound + Space” performance at the Van Nuys FlyAway this weekend.

String Theory is a hybrid performance group that has performed across the nation and abroad since its inception in 2002. They are known for their signature piece; a giant harp. String Theory performed a blend of classical music and opera complemented by dancers.

During the concert, the audience had to be alert all the time to not miss out on anything. The visitors moved around, through the terminal, making the audience active participants, which I enjoyed.

The performance started at the baggage claim with dancers and pre-recorded music.

The light streaming into the bus station windows created a special atmosphere. A woman with a green suitcase with speakers walked past the crowd to illustrate a traveler, while another woman was dancing outside. It took a while before people noticed her dancing.

“Welcome aboard station five” is announced over the sound system. The pre-recorded music was regular sound taken from the bus station, which gave a unique look on the performance. The performance moved to four different locations at the bus station, one inside and the other outside. Every place had its own type of music and dance.

The last part of the event consisted of  the big harp and pop songs, with new material from cellist and composer Joseph Harvey. The Curve Harp was an incredible sight; twenty-four, 100-foot-long strings were attached to the top of the parking structure to the balcony of the station’s offices.

The musicians used special gloves when they stroked and plucked the strings, while dancers moved through the terminal. I enjoyed the interactive performance, however, it was sometimes difficult to know when to move to the next place. This was especially the case at the second location, some visitors started to move to the third place before they were supposed to. However, the people seemed to enjoy the performance, especially the younger audience. Classic songs are not what I view as children’s favorite genre, but they were following the performance with wide eyes.