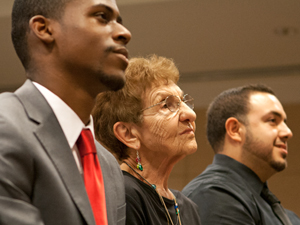 Eleven individuals from the Northridge community presented their stories of hardship and triumph Monday night in the Oviatt Library.

The event, called “One Amazing Community,” was hosted by Unified We Serve, a club on campus that focuses on volunteer work in the community.

“You get the viewpoint of people who survived tragedy and disabilities and learn about the difficulties they have overcome. It’s an important point of view,” said Travis White, an usher for the event and a volunteer involved in the club.

In the main lobby of the Oviatt Library, displays were set up to introduce each speaker. They included personal items, such as a bible and photographs. A short biography of each speaker was also included.

The event was inspired by the freshman mandatory reading book “One Amazing Thing” by Chitra Divakaruni. Unified We Serve chose to expand the scope of this theme to include the CSUN community and inspire people to share their stories.

“We hope to start a dialogue, a face to face interaction,” said Talar Alexanian, an assistant for Unified We Serve.

The eleven speakers included students, faculty, and neighbors of the campus, all with very different tales to tell. From overcoming disease to surviving the Holocaust, these people had interesting stories and insightful messages for their audience.

First were twin brothers Demontae and Demontray Thompson. They shared their story of going through the foster care system and being raised by their aunt and uncle. They are currently both juniors at CSUN, majoring in business management.

Next was Luda Gogolushko, a graduate student majoring in Communication Studies. Gogolushko was diagnosed with Spinal Muscular Atrophy Type III as a child and has been in a wheelchair since she was nine. She has become a motivational speaker, and even spoke at Northridge’s Freshman Convocation in 2011.

Following her was the inspirational story of Devon Johnson, who overcame homelessness and depression by enrolling in CSUN. After the economic downturn, Johnson who worked in the mortgage industry, lost everything. But by getting back into college, he turned his life around. Currently he leads the Hope Fellowship club on campus.

One of the more striking speeches came from Sonia Liberman, a Holocaust survivor who lives only a few blocks from campus. Her family was killed during the Holocaust when she was seven. Liberman was saved by hiding away with another family. She talked about her struggles with contemplating suicide and being angry for what had happened. Liberman then decided to educate herself after what her father had told her when she was a child:

“No one can take your knowledge away from you—educate yourself,” she quoted.

Liberman took this advice to heart, and became a teacher. Currently she works with special needs children.

Due to time constraints, the Q&A session was cut down to be only a few minutes long. However, the speakers walked around, took pictures with and met the crowd after the event was over. There were also notebooks left in the back, one for each speaker, in which audience members could leave a message for them.

In their closing thoughts, Unified We Serve assistants Latanza Price and Talar Alexanian thanked the speakers for their time and stories.

“Our campus is full of individuals with stories to tell,” said Alexanian.