LAPD conducts a sting near campus 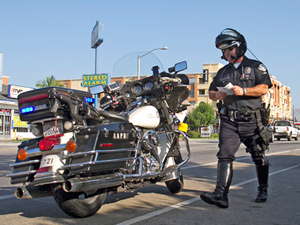 Four officers on motorcycles were stationed on Dearborn, looking for traffic violators.

“We want to educate the public about safer driving,” said Tim Gallick, LAPD officer. “A lot of drivers are inattentive to people in the area, they don’t look out to see what’s ahead. Traffic accidents between the last week have risen 57 percent.”

At least three cars were pulled over within a span of 20 minutes.

LAPD officer Troy Williams said that traffic violations range from speeding up to red lights, illegal U-turns, and not yielding to pedestrians.

“A couple of students have been hit on Reseda already,” Williams said. “A lot of times people will make illegal U-turns in the middle of street. Aside from being illegal, it’s unsafe.”

The enforcement operation was scheduled to last from 7 a.m. to 10:30 a.m., but ended an hour earlier than scheduled.