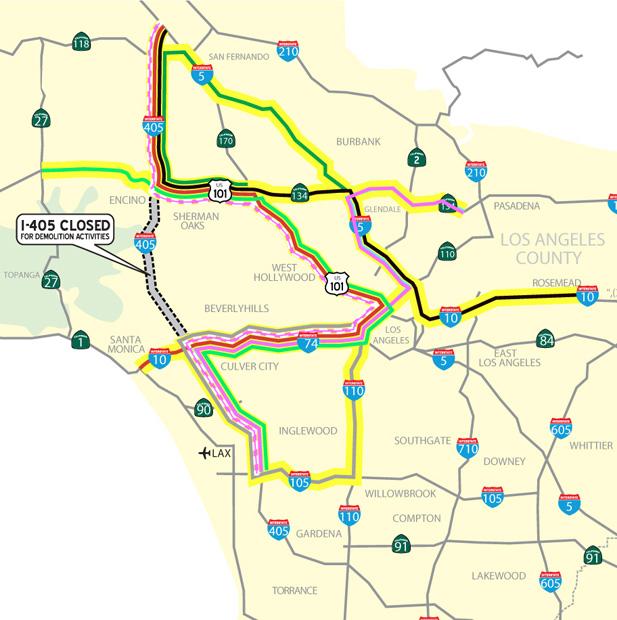 The I-405 Sepulveda Pass Improvements Project is preparing for the demolition of Mulholland Drive Bridge, causing full closure of Interstate 405 on Sept. 29 and 30.

According to the Los Angeles County Metropolitan Transportation Authority (Metro), the 608-foot-long bridge will be demolished and reconstructed that weekend for the purpose of widening I-405 by approximately 10 feet and updating the bridge to new seismic standards.

In addition to widened lanes, the project will provide a continuous carpool lane heading both directions of I-405. This will increase traffic flow on the nation’s most-traveled highway with an annual daily traffic of 374,000 motorists, according to the U.S. Department of Transportation.

Construction will also include the removal and replacement of the Skirball Center Drive and Sunset Bridges along with the widening of 13 underpasses and construction of 18 miles of retaining and sound wall, according  to Metro.

Motorists are faced with high congestion of the I-405 as well as surrounding highways. Dave Sotero, a Metro spokesman, encourages residents to stay local for the weekend.

“If you really must commute on these days, plan ahead,” said Sotero.

According to Sotero, the challenge is finding immediate alternate routes.

“Motorists will be forced to boomerang around the 405 taking US-101, I-110, and I-10 since there are no immediate routes through the canyons.”

Metro is working in cooperation with the Department of Transportation and the Los Angeles Police Department to ensure safety in the case of overwhelming congestion and possible collisions.

To help lessen the confusion, changeable message signs (CMS) have been placed throughout the highway the past few weeks reminding motorists of the expected closures.

Many students are left unaware of these closures.Vinita Ganesh, 21, a junior majoring in kinesiology and a singer, was surprised to hear the news.

“I take the 405 South down to Cerritos almost every weekend for my music lessons,” said Ganesh.

According to Ganesh, she will have to make arrangements if she wants to reach the lesson on time.

“Traffic is going to be crazy. So I’ll most likely Skype my music teacher and learn the lesson through video chat,” she said.

Other students, like Eduardo Rodriguez, 17, a freshman majoring in psychology, aren’t too concerned until the day before construction. Although he plans to take the I-405 to Los Angeles for a church gathering, Rodriguez said he has not put too much thought into it yet.

Every six months Rodriguez and his family meet with their church group, El Divino Salvador Del Mundo, to discuss their plans and expectations for the upcoming months. This time the meeting falls on the weekend closure.

“We’ll have to plan ahead, but my sisters will plan the commute since they know the alternate routes and freeways to get there on time,” he said.

The I-405 closure that occurred in July 2011, dubbed Carmageddon, was predicted to cause similar congestion and havoc, but residents were surprised to find light traffic instead. Construction even finished ahead of schedule, opening I-405 17 hours sooner than planned.