CSUN celebrates the official grand opening of the Pride Center 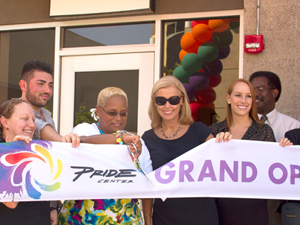 Updated with additional information and quotes.

After two years of student activism and planning, CSUN’s LGBTQ community has a new home.

The USU celebrated the grand opening of its Pride Center Thursday with a ribbon cutting ceremony, making it the first official location for LGBTQ resources on campus.

“This center has been moved from classrooms to bungalows to offices in an effort to create a safe space for LGBTQ students,” said William Watkins, vice president for Student Affairs.

LGBTA President Arutyun Ambartsumyan and LGBTQ student leader Karlee Johnson spoke on behalf of those involved in the process.

“We are not the first students to propose the idea of the center, but we’re the first group to see this dream become a reality,” Johnson said. “This is a testament to progress that says, ‘We’re here, we’re queer, we did it.'”

According to President Dianne Harrison, an estimated 10 percent of the CSUN community is gay, lesbian, bisexual, transgender or queer. The center, which was paid for by the USU and the Campus Quality Fee, serves as a central place for LGBTQ individuals and their allies to come for resources and support.

After the ceremony, students enjoyed music and free food while touring the center and celebrating the LGBTQ community.

“Students are the next generation,” Parshley said. “It’s good to get them active and speaking out now so they’re ready to do big things later.”

The USU set up a video booth to record attendees’ coming out stories and “It Gets Better” messages, supporting those who are experiencing bullying and difficulty with their sexual orientation. Submissions will be shared at the USU’s Oct. 10 “I’m Coming Out” event in honor of LGBT History Month.

Attendees could also contribute to a community quilt at the Craft Corner. Acceptance, love and personal struggles and triumphs were common themes among the messages that decorated more than 120 unassembled fabric squares. Once the quilt is put together, it will be hung in the Pride Center as a commemorative project from students to the LGBTQ community, said Emmanuel Martinez, USU Events Assistant director.

The center, which offers peer mentoring and hosts club meetings and social events, has already made an impact on students looking for support.

“I think it’s good on the university’s part to bring this to campus,” said David Osorio, freshman music education major. “It’s no longer something to be hidden–it’s a central feature of the USU and CSUN as a whole.”

Osorio said he feels welcome in a whole new way.

“It’s comforting to know that there are all these resources available to us,” he said.

Organizers handed out rainbow roses to place at the feet of the matador statue across from the USU. The symbolic gesture, which has become a tradition at campus events, had a double meaning at the center’s opening. According to Hammond, the violet color on the roses symbolizes spirit to the LGBTQ community. In placing the rose before the matador, it represented the spirit of CSUN as well.