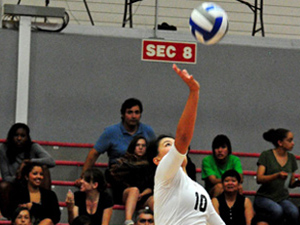 Freshman outside hitter/middle blocker Cieana Stinson made an impressive introduction in front of the Matadome faithful Thursday night as she helped lead CSUN to a four-set victory over rival Long Beach State.

Stinson had a game-high 18 kills, two blocks and three block assists over the defending conference champs.

“I just appreciate the opportunity I have to play,” Stinson said.  “I’m happy I get to play on the court as a freshman and I just take it to heart.  My position could be taken at any time, so I just try hard and do the best I can for my team.”

Head coach Jeff Stork was complimentary of his team’s performance, especially that of Stinson.

“She has a very live arm, most of it from the right side which is off of one foot, which is her strength,” Stork said..  “We try to put her in that situation and she was very successful tonight.”

“Two of my really good friends are the middles for Long Beach, so it was extremely important for me to block them,” Hinger said.  “We watch video on them, we scout them really well and we know how they hit.”

CSUN has won four of the last five matches from their southern rival in the Matadome.

Sophomore outside hitter Mahina Haina made a thunderous kill from the back row to put CSUN up 12-9 in the first set, forcing Long Beach to call a timeout.  Haina finished the game with 13 kills and eight digs.

Later in the set, the 49ers went on a 7-1 run to a 16-13 lead.  CSUN blocking up front by Stinson and Hinger helped the Matadors to close the gap and tie it up, but late defensive miscues cost the Matadors the first set, 25-23.

In the second set, sophomore outside hitter Britney Graff served a floating, high-arcing serve that then dropped like an anvil to get the Matadors up 6-2.  Graff finished the night with nine kills, eight digs and three service aces.

Stinson kept the momentum going with two booming kills over Long Beach star Delainey Aigner-Swesey to give the Matadors a 12-8 lead.  Aigner-Swesey led the 49ers with 14 kills, seven digs and three block assists.

A Matador defensive error almost had Long Beach’s Chisom Okpala with a free kill, but Okpala netted to give CSUN a 19-14 lead.

Stinson lined a kill down the sideline to win the second set for the Matadors, 25-19.

Midway through the third set, Stinson tried to jumpstart the CSUN offense with a powerful kill, closing the deficit to 12-13.  Shortly after, the call was reversed, giving the 49ers the ball and causing the crowd to yell “Replacement refs!”

Graff hammered the ball through the 49er defense to even the score and amend the call.

Kaul and Stinson stuffed the kill to lead the Matadors to a 25-17 win in the third set, a feat they would repeat at the close of the decisive fourth set.

Junior setter Sydney Gedryn and Kaul kept the momentum of the match in CSUN’s favor when they roofed Okpala to keep a two-point cushion and Haina hit another kill off the block to extend the lead to three and forcing a 49er timeout at 8-5.

After a long rally, Stinson found another hole in the defense to keep a three-point lead for CSUN.

Long Beach went on a 2-0 run after a Graff cross-court kill until the 49ers were called for a netting penalty.  Long Beach head coach Brian Gimmillaro and two players argued with the ref, causing the Matadome faithul to yell “Sit down coach!”

Again, Stinson broke the tie with a kill, this time off a 49er defender.  A Long Beach error gave the Matadors an extra point and a 22-20 lead.

Hinger thought the team’s growth has shown in their play against top conference powers.

“We’ve grown so much since last year,” Hinger said.  “I don’t think anyone in our conference really took it seriously until they saw the Hawaii game and saw that we were capable of beating a great team and we just proved it tonight by beating another great team.”

The Matadors next host the UC Irvine Anteaters Saturday night before going on a three-game road trip.