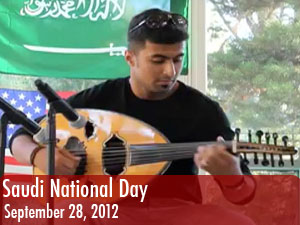 The Grand Salon was decorated in green and white, the colors of the Saudi Arabian flag. The men wore thobs, which are traditional Saudi Arabian clothing. A picture of King Abduliziz and the crown prince Salman was featured at the podium, in addition to the Saudi and American flags.

The event started with the Quran and was followed by the Saudi anthem and the American anthem, as a way to pay respect to the U.S. said Abdulaziz Aljamaan, the president of the Saudi Student Association.