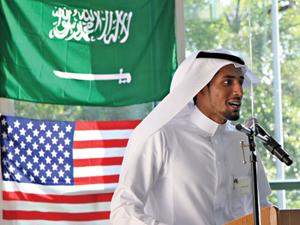 The Grand Salon was decorated in green and white, the colors of the Saudi Arabian flag. The men wore thobs, which are traditional Saudi Arabian clothing. A picture of King Abduliziz and the crown prince Salman was featured at the podium, in addition to the Saudi and American flags.

The event started with the Quran and was followed by the Saudi anthem and the American anthem, as a way to pay respect to the U.S. said Abdulaziz Aljamaan, the president of the Saudi Student Association.

Eleazar Xa, a senior international student from China majoring in senior marketing, came to learn about Islam and he particularly liked the traditional clothing styles.

Three different dances were performed at the event, one of them being the original version of Ardah. The dance, Ardah, varies from one area to another, but we decided to show the one the royals prefer, said Almujibah.

There was a small exhibition featuring images of traditional clothing, holy buildings and nature photography by Saudi Arabian Cultural Mission, as a way of giving students an image of the country.

Students were able to try out local clothing, taste local food and get a henna tattoo by tattooist Shempi Kaur.

Faisal alZamil, a freshman majoring in manufacturing system engineering, thought it was a great way to gather Saudi students and to see their talents. The music was what he enjoyed the most.

“This is maybe the only event where Saudi people have a chance to meet each other,” Mirza said.