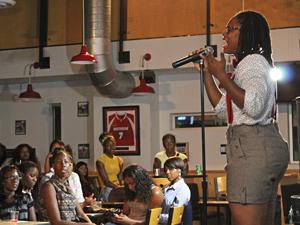 >>CORRECTION: Soulful Saturdays is a monthly event, not weekly as stated in the article.

Singers and CSUN alumni Jessica Samiere and Angelica Abrams performed a collection of songs for students and guests, earning cheers and applause from the seat-filled Pub Sports Grill at the USU’s first “Soulful Saturdays” event of the semester on Sept. 29.

The event was free for students and $5 for non-students. The weekly event features local musicians chosen by the event planning staff and will vary in genre each week, according to event planner Quinesha Summerville, 21.

Summerville, a senior theater major, said the event is a safe and affordable option for students.

“Soulful Saturdays is a night out for students, and it’s something safe and cost-effective with free music and free food,” said Summerville, theater major.

Some of the future themes include jazz, indie rock and alternative, country and Latin.

Samiere, 24, was the first to perform and attended a Soulful Saturday event last year. Now a CSUN alumna who graduated in 2011 in sociology, Samiere recently released a mixtape called “Paint It Pink” and said she is working on other musical projects.

Emmanuel Martinez, a senior English major who works for the USU events department, helped set up the event. Martinez went to Soulful Saturdays as a student before he worked in planning at the USU, and said he is glad he can still attend the event after set-up to see his hard work pay off.

“It’s just a feel good event for students to come enjoy on a Saturday night as opposed to going somewhere far and spending money,” said Martinez, 22. “It brings the students back to campus on a weekend and helps them relax and enjoy really good music by really good performers who are usually CSUN students.”

Abrams, 23, ended the R&B-themed evening with a mix of cover songs and original music. Abrams, who graduated from CSUN in 2011 in music industry studies, said she used to frequent the Pub in her days as a student and felt nostalgic when coming to perform.

“I actually played in the Pub as a student two or three years ago,” Abrams said. “It’s fun to be here not as a student and playing again for my friends and CSUN students.”

Abrams released her new single, “Do I Love You,” in London on Sept. 30.

Tabitha Sanchez, a freshman communications major, heard about the event on her portal and said she enjoyed herself and the performers.

“The Soulful Saturday event really drew me in because I like to get involved and see what’s in store on campus,” said Sanchez, 18. “Of course, they have a free meal, and you can’t miss out on that!”

Information on Soulful Saturdays can be found on USU’s Facebook page, events calendar or the USU home page.