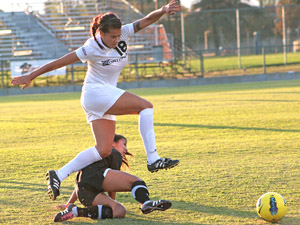 Controlling the pace of the game and having possession of the ball throughout most of the first half helped the Matadors (4-3-4) keep the shorter, faster Hawai’i (5-5-2) team off-balance.

Northridge was able to score their quickest goal of the season, only a little over a minute into the game.  A shot cleared away after a deflection off a Wahine defender by senior forward Melissa Fernandez bounced toward senior defender Nicole Cruz who buried it in the back of the net for her first goal of the season.

“I was a little nervous just because I saw no one was in front of the goal,” Cruz said. “I was excited when it went in. I just hope the rest of the season goes as well as today.”

Many of CSUN’S Matadors weren’t successful as multiple shots sailed above the goal, including a header off the post. The Rainbow Wahine’s last defender made multiple stops on the Matadors’ offense, killing momentum and rendering them unable to finish fast breaks.

Hawai’i came out in the second half looking like a different team, using their size and speed to their advantage and taking control of the ball. However, the Matadors’ defenders didn’t find that much of a problem.

“I think along with the size, we had our own speed, and played our game, didn’t find it as much of a problem,” said junior defender Chloe McDaniel.

The Rainbow Wahine’s time as the dominant team wouldn’t last for long though, as the Matadors fought back against their onslaught.

Scoring her first goal of the night, and third point, Fernandez picked up a ball that was deflected off the goalie on a shot by redshirt sophomore, forward Brittanie Sakajian, and shot it into the lower left corner of the goal.

“I finished something that Brittanie had already started,” Fernandez said. “She shot it, and it was a rebound really, I was like ‘I’m getting this ball’ and put it in the back of the net.”

Fernandez is tied for the team lead in goals, with two, and assists, with four, while leading the team with eight points on the season.

Coming off hard losses to Santa Clara, University of San Diego, and Friday’s tie to Portland, a win was something that the Matadors desperately needed and achieved.

Keeping the Rainbow Wahine on their defensive half helped the Matadors reach a season low on shots allowed, with six, including no shots on goal in the second half.

“I’m proud of my team,” West said. “When you got to travel on a Wednesday and Thursday and have a short week to get ready for a conference game is hard. I thought we responded great, proud of the team, they are a good side.”