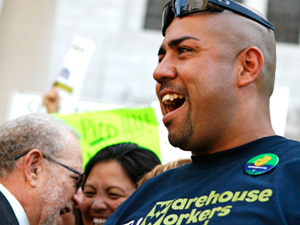 He works in sweltering conditions, often times without any ventilation or fans, in hours of darkness.

He risks physical injury trying to make his nightly quota of 250 boxes an hour while working at a warehouse with no clean water.

Ruben Valadez, 61, worked through these conditions as a lumper, a worker who loads and unloads trailers of merchandise that end up on the shelves of Walmart retail stores in California.

Valadez was one of 50 workers who walked off the job and marched from their Mira Loma plant to Los Angeles City Hall. The protest march took six days and 50 miles through three counties.

As the world’s largest retailer, Walmart employs approximately 2.1 million people worldwide. Thousands of these workers can be found in retail stores, and also in California warehouses similar to the one that Valadez works in.

“Trailers come in and we unload merchandise onto metal carts or pallet jacks,” Valadez said at a rally at City Hall Sept. 18. “Everything you find inside a Walmart store, except groceries, is moved at that dock.”

Valadez started working at the warehouse in February for $8.50 an hour and worked from 12:30 a.m. to 8 a.m.  Throughout his tenure at the warehouse, he was unable to generate enough money to pay the rent and was subsequently evicted from his apartment.

The distribution center is owned by NFI, a privately-held New Jersey firm that handles transport of goods.  The Mira Loma warehouse receives Walmart goods from the ports of Los Angeles and Long Beach and distributes them nationwide.

“Although they work for subcontractors, the heavy boxes the workers carry day in and day out carry merchandise destined for Walmart shelves,” said Guadalupe Palma, deputy director of Warehouse Workers United and CSUN alumna.

NFI has appealed the citations.

“Workers at the Mira Loma warehouse are calling on Walmart for them to take responsibility, to ensure that the workers at least have clean drinking water, working equipment, fans because the temperature inside the warehouses often goes up over 110 degrees,” Palma said.

Walmart employs more than 350,000 California workers in its stores and suppliers.  The average wage for a store employee in the Golden State is $12.82. During its most recent fiscal quarter, Walmart reported sales of $114 billion.

“Part of the union playbook is to drag the Walmart name into the discussion because it gets you guys in the media to pay attention,” said company spokesman Dan Fogleman to the Los Angeles Times.

CSUN economics professor Robert Krol argues that wages are tied to the skills of the workforce.

“They pay the market wage for the workers,” Krol said.  “If the skill requirements are low, the wage will be low.”

Suppliers to big box stores like Walmart sell items at a reduced price in part because of how retailers may buy in bulk.

“Most goods today are still manufactured in places like China. Usually, because Walmart orders mass quantities, they may negotiate preferential prices on certain items, or buy certain items with a bulk discount.  However, this isn’t any different than a deal that Sears, Kmart, or Walgreens may negotiate,” a Walmart clothing producer said on condition of anonymity.

Walmart and labor relations in China have had a rocky past for the better part of a decade.  In a 2008 article in the New York Times, workers in southern China factories earned 55 cents an hour.  Four years earlier, in a story in the Washington Post, a factory engineer that built stereos primarily for Walmart, said, “We have to constantly cut costs to satisfy Walmart.”

Walmart currently has more than 10,000 factory suppliers in China. In December 2007, a pair of nongovernmental organizations found multiple work violations in plants that supply goods to Walmart, including one near Hong Kong that employed child labor.

“Walmart has always been a place to shop at. Good prices and a variety of items make it a great place for one-stop shopping,” said Becky Metcalf, a sign language interpreter in Santa Clarita.

Some shoppers are averse to Walmart because the profits don’t stay in America or help American jobs.

“Shopping at Walmart may be cheaper but none of the profits go back into the American economy,” said Laura Pintar, a recent Cal State Los Angeles graduate in political science. “The few aspects that they do contribute to the local economy is pittance, because those people do not create American economic growth.”

Lance Iliev, a computer technician in Valencia, was previously a receiving clerk and had a different warehouse experience than that of the workers in Mira Loma.

“Safety was always a primary concern for the company that I worked for, and we did what was necessary to be cost effective and productive while being safe,” Iliev said. “We voiced our concerns and let our supervisors know what issues were and tried to create solutions that worked best even if we didn’t get what we wanted.”

Iliev echoed concerns over the workers’ inaccessibility to hydration and cooling.

“Both of those issues are serious safety violations, and the company should be very concerned about it,” Iliev said.

Some expressed doubt over how they would impact Walmart profits if they were to change their shopping habits.

“I would like to do what I can to encourage Walmart to treat their suppliers well, but even if I was to boycott them, it’s not like it’d do much good,” said Metcalf.

The 15-day strike ended Sept. 28 with workers going back to work after NFI-owned warehouses agreed to improving safety conditions.