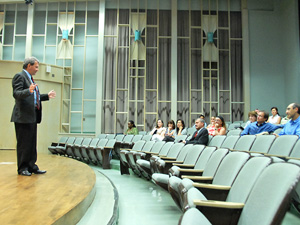 The science curriculum is not keeping up with the changes of the world and as a result, students in primary education are not learning enough about the world they live in.

Ioannis Miaoulis, the president and director of the Museum of Science in Boston, Massachusetts, came with a message of how the education system has missed the target when it comes to teaching students about science and how engineering goes hand in hand with it.

“Science is the discipline that teaches kids how the world around them works,” said Miaoulis.

He brought attention to the fact that a majority of the curriculum students in primary education (K-12) learn is focused on the “natural world,” which includes subjects like the water cycle, how volcanoes work and the vascular structure of collected dried leaves.

Miaoulis stated that 98 percent of the education curriculum focuses on this realm and students miss out on the 2 percent that is considered the “human-made” world.

Miaoulis said that kids grow up without knowing how roads are built, how pens work, how planes fly and where water comes from, among other things.

He described that when he first began to suggest changes to the science curriculum and started his program, his biggest “enemies were the science teachers.”

Despite the opposition in the face of additional work for teachers who felt as if they did not have enough time to teach students the topics already listed in their science curriculum, Miaoulis kept pushing for the changes that were necessary in the academia world.

He said that his dream was to have engineering become its own section in the mainstream K-12 education curriculum by 2015, even as he shifted towards becoming the president and director of the Museum of Science in 2003. At the museum, he wanted his influence with the world of engineering to inspire the students, parents and teachers to keep the progress towards changing the curriculum going.

As a result, Massachusetts was the first to start editing its programs in 1998 to add engineering to it successfully in 2000, after it had remained unchanged since 1893.

Miaoulis talked about several reasons why engineering should become a focal point in the K-12 curriculum including: understanding how the “human-made” world works, a good way to introduce projects that do not relate to the “natural world,” math and science at each grade level relevant to students’ lives and how it helps to create an interest in engineering careers.

“The mainstream curriculum needs to introduce science relevant to kids’ lives and CSUN has a great opportunity to start leading the way to start inspiring students with this wonderful curriculum,” said Miaoulis.

Now he wants to spread the message with his two programs “Engineering is Elementary” and “Engineering Adventures,” which both focus on introducing students to engineering while making it both interesting and fun for the students.

“It was a very inspiring talk,” said Dr. S.K. Ramesh, dean of the College of Engineering and Computer Science, who helped to coordinate the event with Robert Bucker, dean of the Mike Curb College of Arts, Media, and Communications.

Bucker mentioned at the end of the lecture that the National Science Foundation (NSF) had donated several copies of the engineering books that are used in the K-12 programs as example materials to the Mike Curb college.