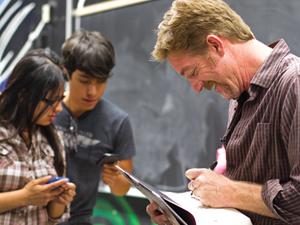 Jeff Biggers spoke about his book, “State Out of the Union,” Tuesday to a packed crowd of students and faculty.

“Everybody loves to mock Arizona. Florida opened a new chain restaurant, it said, ‘Our food is so authentically Mexican, it was banned in Arizona,’” he said.

Dr. Rudy Acuna, founding chair of the Chicano/a studies department at CSUN, said that Biggers is one of the few journalists that have been with the movement since the beginning.

“He is a very progressive person,” Acuna said. “He’s one of the people who I respect because he’s not only writing, but he’s active, and he feels the issue.”

“In 2010, when it all broke loose with SB1070, with the ethnic studies bill, I was out of the state, and all of us were wondering, ‘What’s the matter with Arizona? What’s going on?’” Biggers said. “The cultural context was being left out of the discussion, and you had these front people who suddenly were representing Arizona who were complete carpet baggers, and I felt like ‘they’re not representing my Arizona and not the people fighting back.”

Nobody was seeing the real story: young Latinos were mobilizing, said Biggers.

“Door by door, they turned in 18,000 petitions, nobody could believe it. And on the night of the recall election, we were all there, and the tallies came in for the vote,” he said. “For the first time in American history, a sitting state senate president was recalled. The architect of SB1070 was out.”

“I’ve seen people talk about Chicano issues, but they’re people of color,” she said. “This is the first time I’ve seen someone who is not of color voicing in about our struggle.”