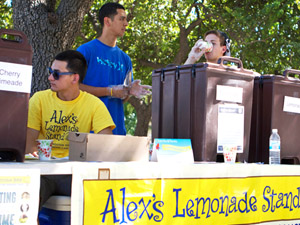 Sigma Alpha Epsilon held their first philanthropy event of the semester on Tuesday called Alex’s Lemonade Stand, where the fraternity poured cups of lemonade for students and faculty.

The purpose of the lemonade stand was to support the fight against childhood cancer and was in honor of Alexandra ‘Alex’ Scott, an 8-year-old girl who passed away in 2004 due to a form of cancer called neuroblastoma.

Before dying, Alex told her mom that she wanted a lemonade stand in early 2000, and later that year her mother did just that and raised more than $2,000.

Johnathan Olvera, philanthropy chair for the fraternity, said it meant more something to him.

“My dad ran this stand and pushed it on to me” said Olvera, a kinesiology major in his third year at CSUN. “My mother had a nephew who past away from cancer (and) I’m really excited for this foundation.”

With lemonade being the main attraction, the stand also offered a pin and a bracelet, all for $1.

Diana Betz, a CTVA sorority and senior, said she found out about the lemonade stand through facebook.

“I got all three items, lemonade, a pin, and the bracelet,” said Justin Maidenberg, a sophomore business management major, who participated in the event.

Maidenberg is excited for all the fraternity’s philanthropy events. The fraternity plans to hold another event for diabetes next semester.

Olvera said that Alex’s Lemonade stand is open and available for anyone interested in helping to raise money for childhood cancer by contacting the organization at www.Alexslemonade.org.