Fort for the foreclosed 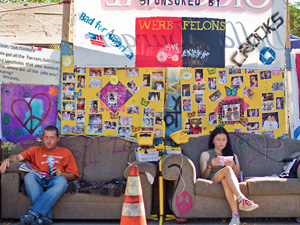 >>UPDATE Oct. 14: The Hernandez family was a served a final eviction notice Oct.9 by Bank of America. On Saturday, Oct. 13 in front of the Hernandez home, LAPD officers served a bench warrant for failure to appear in court for Ulises Hernandez. He was released on bail late last night. Hernandez said that it was for failure to appear in court to pay an infraction for riding the bus without bus fair. LAPD was not immediately available to comment. The family has filed complaints against LAPD, citing harassment and intimidation.

>>UPDATE Oct. 8: In spite of an early morning seizure by LAPD this past Thursday morning, Oct. 4 at approximately 5:20 a.m., the Hernandez family house dubbed Fort Hernandez, is on their 44th day occupying their home.

Approximately 40 LAPD officers equipped with a U-Haul moving truck began removing couches, signs, debris and property belonging to Hernandez supporters from the front of the home. A car was reportedly impounded as well.No arrests were made.

“It wasn’t a raid,” said Ulises Hernandez, resident and Fort Hernandez activist. “We’re in negotiations with the bank. They cannot evict us.”

LAPD arrived to enforce code regulations by the Department of Building and Safety. However, Hernandez believes it was an intimidation tactic.

“Police showed up in heavy force with lightweight gear threatening to arrest or beat us up,” Hernandez said. “They were about 40 of them. They just took the couches and other stuff.”

LAPD informed the Hernandez family that they had to move the barricade 14 feet back from where it currently stood.

Supporters are still at the Fort, said Hernandez. If anything, he said, their numbers have increased.

A barricaded home with determined supporters are on the lawn, holding picket signs and offering food to a passerby.

An American flag waves in the wind. Banners decorate the home. “Children live here,” is written on a sign. “Is your home next?” reads another.

After four years of fighting against Bank of America, the Hernandez family was given a notice on Aug. 21 to vacate their home after being unable to pay their mortgage. Five days later, they received their final notice, but the family decided to stay on the property. After seeing 174 foreclosures within the 91405 zip code, the Hernandez family knew it was time for action.

Activists are sharing the history of this organized attempt to overcome the banks. A large contingency of Occupy protesters act as a safeguard for the property.

The home has been dubbed “Fort Hernandez.” The residence was turned into a camping ground for many who have lost their homes in bank foreclosure. Fort Hernandez has become the heart of one of the local Occupy movements, Occupy San Fernando Valley.

“We knew we weren’t going to give up the house,” said Ulises Hernandez, 21, one of the 11 members of the household. “The next thing you know, we had built a fort.”

Hundreds of people just like the Hernandez family are dealing with bank foreclosures on a daily basis. According to the Center for Responsible Lending, a non-profit organization which aims to protect home ownership and family wealth, nearly

“500 California families have lost their homes every day since 2007” while hitting ethnic minorities the hardest. From a Center for Responsible Lending report in April 2010, a total of 2.5 million homes were foreclosed from 2007 to 2009.
David Rodriguez, CSUN Chicano/a studies professor with an emphasis in political economics, said most Latinos have been impacted unevenly in the housing market for a wide range of reasons.  According to Rodriguez, ethnic minorities are faced with poverty, lower education, a loss of jobs, and bad credit. For these reasons they were hit the hardest.

“They were brought into bank schemes that didn’t give them the details,” Rodriguez said. “They didn’t read the fine print. Some began losing theirs jobs and others had stagnant wages which made it more difficult for them to pay their mortgage.”

However, bank foreclosures have been decreasing within the past few years, according to Athena Tiongson, a realtor for Pinnacle Estate Properties Inc.,

“Foreclosures are much less,” said Tiongson. “In fact, there are a lot of buyers looking for homes now in a much better market.”

But this isn’t just a trend in California, although it is the state with the highest number of foreclosure homes. Nationwide, almost 1.5 million homes have been foreclosed in 2012 alone according to Realty Trac, a leading online marketplace of foreclosure properties.

Fort Hernandez has also become a site for community events and local outreach. Couches, blankets, chairs, smiling faces and a buffet table full of food gives the place an immediate sense of home, welcoming everyone.

“We are trying to create a community,” said Hernandez. “We barely spoke to our neighbors, but now they pass by, we talk and they ask questions.”

In addition to organizing the community, the activists behind this fort are holding an educational forum with guest speakers informing the community and anyone who is interested on avoiding foreclosures and being more aware of the small-print in many home loans.

But their effort comes with consequences. According to Hernandez, two LAPD officers and two Department of Children and Family Services agents arrived unexpectedly at the fort on Wednesday Sept. 19 at midnight in response to an anonymous call claiming the children there were living in unfit conditions without electricity or running water.

The family refuted all claims. Hernandez then filmed a video that morning showing a clip of running water, the lights on, and the unharmed children sleeping in their tents. The next day, he was cited by police for obstructing traffic for having sofas on the street.

“This isn’t about just one house,” said Hernandez. “We aren’t being selfish. This is about all the homes that have been lost, leaving families homeless with no where to go.  And for that, we are willing to risk arrest to save this home.”
A local supporter of Fort Hernandez, Chris Rose, 23, encourages residents to take a second look at the Occupy movement in Van Nuys as well as others around the state.

“Start talking to your community about these issues,” said Rose. “These corrupt bank foreclosures really target the poor and ethnic minorities. They ultimately force them to take title loans and bet against themselves.”

Javier Hernandez, 31, title owner of the home and older brother of Ulises, first mortgaged the house at the age of 25 because his parents were undocumented and saw no other way to provide a place to live for his family.
Seven years later, he’s struggling again to maintain the house for his parents and younger siblings.

Once the family decided to barricade the house, the Hernandez brothers started walking around their neighborhood, knocking on the doors of area residents going through the same problem, telling them they weren’t fighting their battle alone.

“We aren’t asking everyone to barricade their home and refuse to leave,” said Javier. “All we ask is that they show some resistance.”