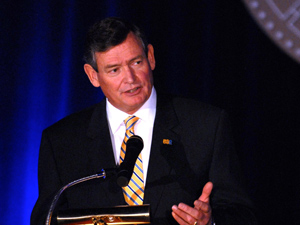 Timothy P. White, chancellor of the University of California, Riverside (UCR), has been selected as the seventh chancellor for the California State University(CSU) system.

He has served as the chancellor of Riverside since 2008, and in the years he has served, the campus has expanded to nearly 21,000 students. He also improved the university’s goal to create a school of medicine by securing $100 million for it and hiring its founding dean, according to the press release on the CSU website.

In addition to the developments that took place at UCR during White’s tenure, he was also valued for his leadership abilities.

“He was an exceptional leader, universally respected and loved by faculty, students and staff, which is, as we know, quite unusual to have that respect throughout the campus,” said James
Grant, assistant vice chancellor for strategic communications at UCR.

“Given Dr. White’s background in public higher education, we are hopeful that he will understand the needs of the CSU and will establish a goal of unifying everyone behind our critical educational mission, particularly during these difficult times,” said Lillian Taiz, president of the California Faculty Association and history professor at Cal State Los Angeles, in a statement.

Grant said White is in some ways a living example of the California Master Plan, which integrates higher education through community colleges, CSUs and UCs.

“Our loss is the CSU’s gain but we’re so glad he’s going to continue to be a leader in public higher education in California,” he said.

Theresa Montaño, a Chicano/a studies professor at CSUN and board member of the California Faculty Association, said while White’s record seems like a good fit, his leadership of the 23 CSU campuses will all depend on how he reaches out to students and faculty when the time comes.

“I can’t put my faith in one person no matter how great they sound,” she said. “He needs to show us that cares.”

Before becoming the chancellor at UCR, White served as president of the University of Idaho from 2004 to 2008. He was also dean, provost and executive vice president, and interim president at Oregon State University, the release states.

In addition to his administrative accomplishments, Andy Lam, a junior majoring in mechanical engineering at UCR, said White was an accessible chancellor for students at the university.

“You could be in line grabbing lunch or be in the library studying or just walking to class and you can see him walking around campus talking to students about virtually anything,” he said.

Lam said in the three years he has attended Riverside, he feels that the school has improved, particularly with the accreditation of UCR’s medical school.

“He was a great leader and an amazing person. UC Riverside will truly miss him,” he said.

White was born in Buenos Aires, Argentina and immigrated to Northern California. He is expected to begin his new position at the end of December, according to the CSU release.