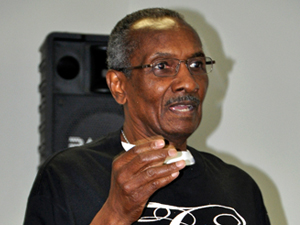 CSUN’s Department of Pan African studies held the second day of the 2012 Film Festival of the Black Panther Party for Self-Defense Thursday at the Satellite Student Union.

The Black Panther Party was a progressive political organization and powerful movement for a social change in America since the Civil War that fought for the black community’s civil rights.

“The younger generation doesn’t understand the history of the Civil Rights movements,” said Michele Beller, coordinator of the festival. “We want to educate students about the party and what role it played for the black community.”

The documentary offered insight into the role of the Black Panther Party in a social revolution and featured the party’s former leader, Dhoruba Bin Wahad, and the struggles he had to take fighting for black people’s rights.

“Our government wants to rewrite the history, to erase the memory,” said Jones after the screening. “The purpose of the filming is to show how everything actually was, and what it was like to be black and poor in the society of 1950 to 1960s.”

The Black Panther Party was community-involved. Many people had no idea that there were free breakfasts for children provided by the party or free medicine, said Beller.

“It was extra credit for my class, but I liked the documentary,” said Brenda Acosta, junior in communication studies major. “It showed us how bad the 1960s were for the black people, we shouldn’t forget that.”