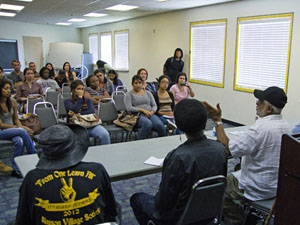 The three-day Black Panther film festival wrapped up at the Satellite Student Union on campus Friday afternoon with a second screening of the documentary “41st and Central: The Untold Story of the L.A. Black Panthers.”

“So, instead of lynching us in public, the police took up the job of keeping us in line. Keeping the unruly negroes in line and keeping them where they would be submissive,” said Freeman. “And that is a direct result of what brought the Black Panther party into being.”

The movie screened for an almost full audience of students, faculty and former Black Panther Party members. The movie chronicled the rise of the Party in Los Angeles during the late 1960’s and the shootout at their headquarters with police officers in 1969.

On hand for the screening were several subjects of the film and other members of the Black Panther movement. They answered questions at the end of film as well.

Hank Jones, a member of the Black Panther Party and one of the shooters at the confrontation with police that the film showcased, addressed the audience at the end about the shootout.

“This was a whole chain of events that lead to this and then our position was that we were not going to back down, so when they came and kicked in the door, we got off. And it was just a clear line of demarcation, so they were prepared to attack us and we were prepared to die.” said Jones.

Jasmine Jackson, a sophomore majoring in biology who initially attended the event for extra credit in her African-American politics class, thought the film was empowering.

“It kind of made me want to be a part of something. I feel like it redirected my life a little bit. I need to have a purpose,” said Jackson.

Jose Mata, a junior at Pierce College majoring in sociology, was seeing the film for a second time and said the violence was not perpetuated by the Panthers but by the system of oppression.