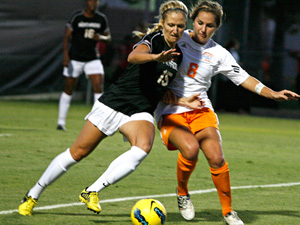 Extra time didn’t last long with the first-minute goal off a blast by Fullerton’s JeAnne Mazeau. The shot was right at Jacobo but it found its way through her legs for the game-winner.

Jacobo made seven saves on the night while the defense allowed 18 shots, nine on goal, in the defeat.

CSF controlled the tempo in the first 10 minutes spending most of their time roaming their attacking half. Northridge switched the momentum in their favor, controlling the ball for a majority of the remaining minutes.

Amanda Smith had two crosses from the right side on consecutive trips to the Fullerton half in the 20th minute but both opportunities were spoiled by the Titan defense.

A slow first half was capped off with some excitement after Northridge put themselves in place to score in the final five minutes, but were unable to get one passed the Titans’ goalkeeper Lyndsey Maricic. A scramble in front of goal brought CSUN’s shots on goal for the half to three but didn’t put anything on the scoreboard.

The Titans managed six shots in the half, two on goal, resulting in two Jacobo saves for Northridge.

CSUN’s offense instantly applied pressure on the Titan’s defense in the 50th minute off a set piece that just barely sailed over the crossbar.

A Matador turnover two minutes later nearly broke the stalemate. CSF forward Stacey Fox placed a perfect through ball on the breakaway to teammate Jennifer Smith on the opposite side but the two-on-two chance ended with a diving Jacobo save, her third of the night.

Fullerton’s Erica Mazeau found her way into the box and put a shot on goal through traffic in the 60th but ended once again in the sure hands of Jacobo.

CSUN continued their “bend-don’t-break” defense, allowing Fullerton its tenth corner kick of the match in the 70th minute.

Northridge regained its composure and managed to apply some pressure in the closing half of the second but couldn’t find a gap in the Fullerton line-up.

“We started slowing the game down,” McDaniel said. “We started attacking their weak areas which is exactly what we discussed before the game. When we did that, we did really well.”

Fullerton scored the only goal of the night with the one-two combo of CSF sisters Erica and JeAnne Mazeau. Erica passed to an open JeAnne who put up the shot that ultimately gave Fullerton the Big West victory.

Northridge added nine shots on goal in the second, compared to Fullerton’s 11 in the half.

Fullerton’s Maricic had five saves of her own in the little time Northridge had in the Titan defensive half.

“It was more ‘what did we do wrong on offense’ than what they did,” said CSUN head coach Keith West. “We have scored a lot of goals period. We’re slowing down ourselves.”