None for all and all for none 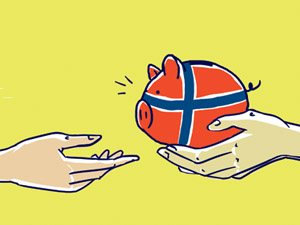 Growing up in Norway, we are taught Jante’s Laws by Aksel Sandemose. These laws say that everyone is equal.

The laws teach Norwegians to be modest and to not show off our wealth or financial achievements. I think Jante’s Law has shaped Norway into the successful social welfare state that it is today.

Norwegians believe everyone is responsible for the society and the citizen’s well being. I don’t mind paying taxes so my friend or my previous teacher could get the cancer treatment they need, or so the poor boy in our neighborhood can get an education.

For me, education is the key to a better society, which is why I don’t understand why many Americans don’t want to pay taxes to have free education and free health care. I have always thought America and Norway were similar, but after I moved here, I realized I was wrong.

Americans’ minds are set on the idea that everyone is responsible for making their own way in life.

For some people, paying taxes so that your neighbor can get free education and health care is out of the question.

Why would you work nine hours a week so your next-door neighbor’s daughter receives medicine for her leukemia, when you can barely put food on your own table?

It is understandable to think of yourself in this situation. However, paying taxes doesn’t only help your neighbor’s daughter, but it will also benefit your family.

According to Statistics Norway, an average citizen in Norway pays $22,000 in taxes yearly from an income of $73,200, which gives everyone free education and free health care.

“It’s a basic idea in Norwegian society that education is free to secure all citizens equal rights to education regardless of place of residence, sex, social and cultural background and special needs,” said Margunn Instefjord, senior adviser at Norwegian Center for International Cooperation in Education.

Also, if you educate people, communities will change because people will be removed from the street and given opportunities in the classroom.

In 2010, 1.6 million of 308.7 billion were incarcerated in the United States, according to Bureau of Justice Statistics and the 2010 Census.

A 2007 study by researchers from Teachers College of Columbia University, Princeton University and City University of New York, claimed that if the high school dropout rate had been cut in half, the U.S. government would receive $45 billion via extra tax revenue. The study claimed over 50 percent of the state prison inmate population are high school dropouts.

Social services don’t only improve the incarceration rate, but also the rate of unemployment. The unemployment rate in the U.S. is 7.8 percent, while in Norway it’s 2.7 percent of Norway’s labor force.

When it comes to women working in the legislature, Norway has 38 percent compared to 17 percent in the United States, according to the Federation of American Scientists. Other Scandinavian countries that spend more on social services, such as Sweden and Finland, have women in over 40 percent of legislature positions.

The advantages of having a free education for everyone makes education more rigorous and heightens expectations.

Admission to higher education in Norway is based on students’ grades, which means that if you want to be a journalist, but if you are struggling with math and science, there is no way you will be able to attend journalism school.

The popular degrees in Norway such as journalism and medicine of law requires the students to have an American equivalent of a 4.0 GPA. The students who don’t have the grades for it, have to either find another profession or study abroad, which is what many Norwegian students do.

Norway follows the Bologna Process used by 47 countries in Europe, which means that a bachelor’s degree is three years.

The final is a combination of long answer assignments and shorter assignments. There is also a nonmakeup rule in Norwegian education. The final usually counts for about 70 percent of your total grade, which means that if you have a bad day, the chances of you having to retake course the next semester are big.

Multiple choice exams are nonexistent in Norwegian education. Finals are about five hours, and the student will get a combination of different assignments.

Social services benefits individuals, the society and the country’s economy. This country is built upon individualism, instead of thinking of the whole society. Being individualist can be good to a certain extent, but at some point you have to let your pride go and help others.

I’m not saying Norway is perfect, but I think the United States can learn a few things from it.

– Terese Torgersen is an international journalism student from Norway.