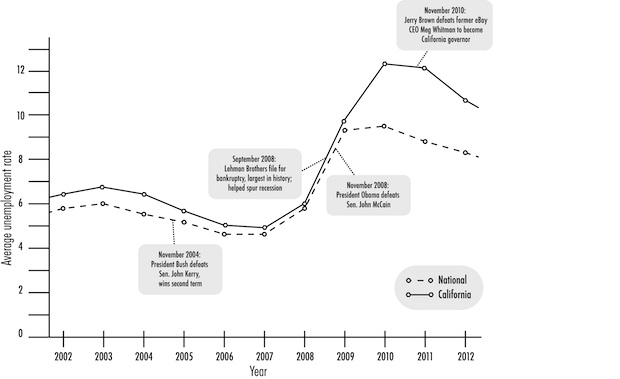 The national unemployment rate fell to its lowest percentage in the last four years, suggesting job growth during the summer. The drop could shift the presidential election and be a possible boost for President Barack Obama.

The Labor Department’s report showed an unemployment rate of 7.8 percent in September, dropping below 8 percent for the first time since Obama took office.

Alan B. Krueger, chairman of the White House Council of economic advisers, expressed in a blog post on the White House’s website that this is “further evidence that the U.S. economy is continuing to heal from the wounds inflicted by the worst downturn since the Great Depression.”

Romney’s campaign has been getting positive feedback since Wednesday’s presidential debate. The former governor expressed in a comment early Friday that “we created fewer jobs in September than in August, and fewer jobs in August than in July, and we’ve lost over 600,000 manufacturing jobs since President Obama took office.”

“If not for all the people who have simply dropped out of the labor force, the real unemployment rate would be closer to 11 percent,” he added.

Krueger said that Obama’s administration policies have helped recover the U.S. economy. Some of these policies include Obama’s American Recovery and Reinvestment Act of 2009, which gave tax incentives and financed entitlements as well as stimulated the economy with public service projects, and Wall Street reforms like the Dodd-Frank bill, which created government regulatory agencies for financial markets.

“It is critical that we continue the policies that are building an economy that works for the middle class as we dig our way out of the deep hole that was caused by the severe recession that began in December 2007,” he wrote.

Tom Hogen-Esch, professor of political science, said the unemployment rate may not change in favor of Obama.

“The Obama administration getting below the 8 percent mark is a big victory; things are headed the right direction,” Hogen-Esch said. “It might change the subject in favor of Obama, whether it will change the votes, probably not. The swing states like Virginia, Ohio and Florida are the numbers that really count, more than the national numbers.”

Florida has an unemployment rate of 8.8 percent, Ohio has a 7.2 percent rate, and Virginia has a 5.9 rate, according to the Bureau of Labor Statistics.

When asked whether the report was the result of the Obama administration’s economic policies, Hogen-Esch said that “over the last years we have recovered, so yeah, maybe it’s safe to say yes.”