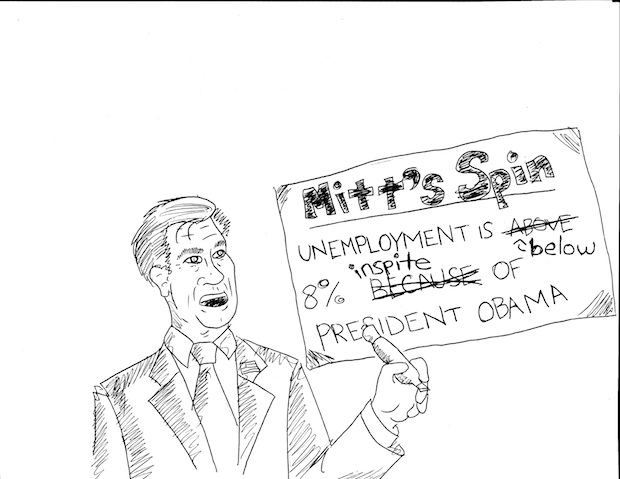 The running problem with the current ramblings of the Republican Party is that reality is only real when it fits their messed-up narrative.

The latest example is Mitt Romney’s tired talking point about the unemployment situation in our country. The most recent jobs report issued by the Bureau of Labor Statistics now shows that unemployment is below Mitt’s wondrous 8 percent threshold, settling in at 7.8 percent for the month of September.

Romney has consistently touted the fact that unemployment was only below 8 percent for the first 11 days of President Obama’s administration. When the numbers weren’t in Obama’s favor, Romney was more than happy to use them to guide his narrative.

The Republican candidate even commented on it during his closing arguments at the first debate.

“We’ve had 43 straight months with unemployment above 8 percent,” said Romney.

But in a turn of events that seems all too familiar for his bungling presidential bid, Romney once again plays the fool. A mere two days after his trouncing of Obama in the first debate, the magical 7.8 percent number was released.

Romney, a true champ at deviating from a stance, decided to double down on the jobs report line he so carefully crafted, and in the process, dismissed reality at a whim.

The number “8 percent” only has impact as a mental threshold. According to the same jobs report, most of the gains in employment were for part-time work and low-skill employees. This is a problem for Obama as it belies the truth of the recovery—that the jobs people want still aren’t there.

But the Republicans’ and Romney’s own campaign have made the 8 percent threshold into an issue that’s come to bite them in the ass. With this latest statement and pigheaded stance, Romney has opted to demolish the stadium rather than moving the goalposts.

Romney’s statement shows the hypocrisy and general disconnect of the current GOP establishment. Former General Electric CEO Jack Welch took to Twitter, and as usually happens with Twitter, Tweeted something he later regretted.

Welch eventually walked it back a bit and claimed in a follow-up Tweet that he didn’t specifically say the White House was responsible for cooking the books. I guess he meant Al Capone.
Quick to follow Welch down the insane rabbit hole, was Florida Congressman Allen West – always reliable for a bout of stupid. West agreed with Welch’s sentiments and took it further saying, “Somehow by manipulation of data, we are below 8 percent unemployment, a month from the presidential election.”

The data that the Bureau of Labor Statistics collects is impartial. No matter how many times you proclaim it from your molehill, that reality doesn’t change.

Obama’s net gain of jobs approaching his four-year mark in office hovers at around 663,000. But the other number behind that is the 4.5 million jobs that were created while he was president. That deficit in jobs was a direct result of the previous administrations bungling through two wars and a broken financial system.

When taken as a whole, the numbers show we are on the right path. No amount of insanity from the right changes that.

—Nathan is a journalism major who lives in a reality only he dictates. It’s made up of gingerbread, frosting and mid-century modern furniture.