Fantasy Football: Underperforming players to deal with before Week 6 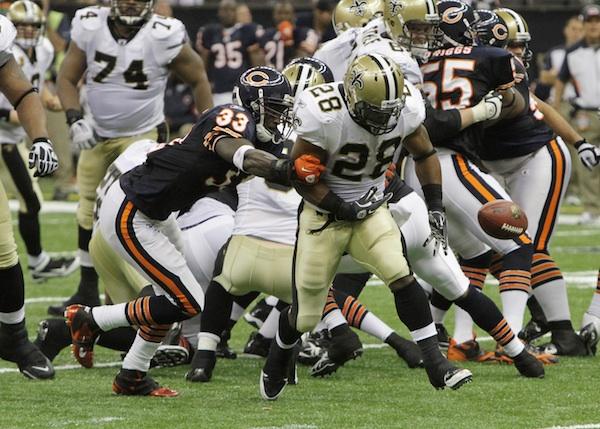 It’s only been five weeks but these players have underperformed to the point where change is necessary. Drop, trade or bench, but any fantasy owner must deal with these players before they cost a team a victory.

Coming out the Lions’ week 5 bye, Matthew Stafford has made no attempts to hide his regression from last season’s stellar 5,000 yard and 41 touchdown year.

Maybe he set the bar too high for himself.

So far, he’s thrown a measly three touchdowns in four games to go along with four interceptions, bringing his passer rating down to 81.6, a 15.6 drop from last season.

Ignoring his rushing statistics, which include a lone touchdown and 36 yards, Stafford has only put up 82 percent of his projected fantasy points, averaging a bit over 19 fantasy points per game. While this may not seem like a lot on the surface, Stafford was ranked 16th (now he’s 54th) by Yahoo! Sports before the season started, meaning he was projected to be on par with players like Brady and Brees.

Can Stafford recover? Maybe, but if you’re a middle-of-the-pack team looking to make key moves to jettison yourself up the standings, there’s no time to wait. Bench him or put him on your trading block and see if anyone bites.

Though still averaging a decent amount of points per game thanks to his ability to double as a starting-caliber running back, Newton seems to have hit the fabled sophomore slump.

A quick look at Newton’s overall performance throughout the season shreds the smokescreen constructed by his phenomenal performance against Atlanta, which had him throw for two touchdowns and rush for one.

Sure, Newton went off that game, but with two games under his belt in which he threw less than 200 yards and no touchdowns (he had a passer rating of less than 60 in both games), it’s tough to trust the second-year quarterback to come through when it’s needed most.

His inconsistent play and statistical drop-off (he’s on pace for less overall touchdowns and yards and more interceptions and fumbles compared to last year) are warning signs for a rough season. Benching him may be a tough pill to swallow, but if he continues to be the black sheep on your star-studded team, it might be time to replace him for a more consistent option.

These are some players currently ranked above Tony Romo, the leader of “America’s team.” To sum up his season so far in one word: awful.

Ranked as 60th best player by Yahoo! Sports coming into the season, Romo dropped all the way down to 157 as his QB rating nosedived to 72.5 — 26 less than last year. So far, he’s thrown five touchdowns in four games (three of them coming in week 1 vs the Giants), but has combined for 10 turnovers (eight interceptions and two lost fumbles).

Throughout the first four games (week 5 was his bye), Romo was projected to have about 80 points, but he walked away with less than 60 — more than half of them coming from week 1. Not good enough.

Casey talks running backs:
Chris Johnson
Tennessee Titans
Johnson has really underperformed and disappointed his owners this year, as proven by Sunday’s game against the Vikings where he rushed for a mere 29 yards on 16 touches. This no doubt tormented fantasy owners who thought they were free from his lackluster play because of the monster game he had the week before, but it appears his 141 yard game was just fool’s gold.Averaging 4.6 points per game for fantasy owners, don’t expect Johnson to come around anytime soon.  Going against the Steelers this weekend, a bad ground game for the Titans will look even worse.

Since rushing for 2,006 yards in 2009, each year has seen a steep decline in his number of touches and yards, which makes one wonder why he’s own by 100% of fantasy players using ESPN’s fantasy football.

Projected to finish with 672 yards for the season, this is one player to dump, trade, or bench fast.

New Orleans Saints
New Orleans has never been much of a running team, but with the drafting of Mark Ingram in 2011, who had an outstanding college career, many believed the Saints’ the ground game would soon flourish, but Ingram’s second year as a pro has been nothing to brag about.Ingram has had single digit touches in four of the first five games, and his season high of 53 yards came in a game where he had 16 carries (3.3 average).  Sharing running back responsibilities with Pierre Thomas and Darren Sproles, who have been producing more so than Ingram, greatly hinder his capabilities.

After three straight games barely averaging over two yards per carry, it is more likely to see a prominent use of Sproles and Thomas in two weeks at Tampa Bay.

After a rookie campaign that didn’t see him cross the 500 yard rushing mark in 10 games, Ingram may be a wrong fit in New Orleans to showcase his running ability.

Looks like drafting a running back on New Orleans is still a poor choice.

Cincinnati Bengals
Starting the season on a high note with back to back double digit scores for fantasy owners, his stock has slowly started to slip — along with his numbers.  Given only nine touches in Sunday’s game against Miami, Green-Ellis gained just 14 yards and looked unmotivated on the field.Multiple times, Green-Ellis had an opening good enough to get through with a burst of speed, but he failed both his fantasy owners and the Bengals alike as he was too slow to hit the gaps. With only his 2010 campaign for the Patriots yielded 1,000 yards rushing and double-digit touchdown numbers, he was supposed to be the Bengals workhorse this year, but he has largely failed.

Averaging just over 3.3 yards per carry and 60 yards per game throughout the first five games, he’s been nothing spectacular.  He also has two touchdowns on the season, which is nice, but this is marred by his three fumbles.

Considered one of the biggest breakout stars a season ago, Nelson has become somewhat of a forgotten man in Green Bay’s offense this year.  Last season, Jordy had 15 touchdowns.  Five games into this season, he has merely one.  Aaron Rodgers has found a new best friend in James Jones, who has a total of four scores over the past two games.  The emergence of Randall Cobb also displaces targets from Nelson’s direction.  To make matters even worse for Nelson owners, Greg Jennings is expected to return soon from his groin injury.

With such a stacked receiving core, there seems to be little room for Nelson to be a consistent fantasy star. If Jones or Cobb are still free agents in your league, pick them up before someone else does! However, if you can fish in the right piece(s) for Nelson, do not fear trading him as his role on the Packers’ offense seems to be dwindling week by week.

It is important to note that at least half the reason Rice’s name is included here is because of his rookie quarterback Russell Wilson.  Wilson’s transition to the NFL has not been as smooth as Robert Griffin III or Andrew Luck’s, to say the least.  This should not come as a surprise, as Luck and RG3 were the first and second pick in this years draft, respectively.

The Seahawks are 31st in total passing yards per game, better than only Jacksonville.  Even though Rice is Seattle’s top receiver, and once was Brett Favre’s favorite target on the Vikings, he does not have a big enough impact to be a fantasy stud anymore.  The bulk of Seattle’s offense comes from star running-back Marshawn Lynch.  Rice has not scored since Week 1, and has failed to top 70 receiving yards in a game this season.

Rice’s value is tied directly to his young quarterback, who’s not living up to the expectations of starting over Flynn, who received a decent-sized contract after throwing over 500 yards last year in a single game.

The reasons for Maclin’s struggles this season are twofold: injury and a feeble Eagle’s offense led by Michael Vick. Vick’s start to the season has been ugly, to say the least.  He has virtually made Maclin a non-factor, with the exception of a stellar Week 1 performance at Cleveland (7 Rec, 96 Yds and 1 TD).

While Maclin has two touchdowns on the year to DeSean Jackson’s one, Jackson has 391 yards, compared to Maclin’s 165.  Frankly, this offense is not good enough to have two WRs placed so high in the projected preseason rankings.  So far, Jackson has been the man.  Unless things change drastically for Philly, Maclin will have a disappointing season. Trade him while he still has decent value.