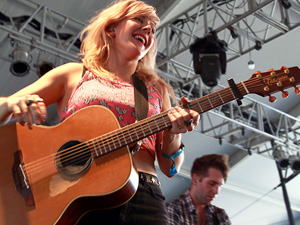 Ellie Goulding’s groundbreaking single “Lights,” from her debut album of the same name, peaked at No. 2 in the Billboard Hot 100 in 2010. The song was driven by electro-pop beats and allowed fans to get lost in her voice by showcasing herself as a vulnerable artist.

Goulding’s sophomore album, “Halcyon,” was released on Oct. 9, 2012 and is embedded in church-like “ooohs” that will produce goose bump.

From start to finish, the album easily invites fans into the church of Goulding as they listen to what becomes an interpretation of a 14-track bible. She has the ability to use her unique voice as a sacred instrument, which helped her put across some of the best melodies, verses and choruses into the new album, possibly making it the best of 2012.

Goulding’s voice is refined, she sings with a sorrow passion that leads fans to trust in her lyrics.

In the ethereal lead single, “Anything Could Happen,” Goulding chants over a one-note piano as her thunderous low voice erupts into the most hauntingly gothic-like love song. “Figure 8” resembles a dark electronic hymn as she sings, “I chased your love around a figure eight, ?I need you more than I can take.”

“My Blood” reigns supreme as one of the standouts of the album; the lyrics expressing that she is a survivor of heartbreak. “With all the blood I lost for you, it drowns the love I thought I knew.”

“Explosions” is a powerful and emotional track that easily becomes ecstasy for today’s pop music when she sings, “It’s okay to be afraid.” Her voice continues to be fragile and light but somehow Goulding manages to take control of the song by capturing the true essence of heartfelt meaning.

It truly is hard to choose the best songs on this album since they are pitch perfect; they unfold into a series of contemporaneous songs reminiscent of Björk tunes.

She has proven to set herself apart from today’s auto-tune pop artists by charming her audience with her timorous vibrato and trance beats that easily venture outside of today’s childlike music by presenting an eerie journey out of anguish in the album.

And then there are times where “Halcyon” proves that Ellie is being Ellie, where her music cannot be defined as being influenced by others since she is simply harmonizing to the future beat of pop music.