Congressmen Berman and Sherman get in heated confrontation at debate 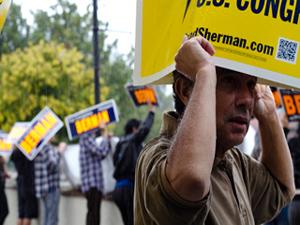 Democratic Reps. Brad Sherman and Howard Berman debated on several hot button issues on Thursday that led to a face-to-face confrontation in an auditorium full of howling students and community members at Pierce College.

Both congressmen are running to represent the state’s 30th congressional district, comprised of the western San Fernando Valley.

The heated confrontation arose toward the end of the debate, during a disagreement of Berman’s leadership on the DREAM Act. Berman, who was standing up, said he introduced the bill to Congress and called Sherman delusional for saying otherwise.

Sherman then stood up from his seat and yelled into the microphone that Luis Gutierrez (D-IL), a representative from Illinois, had introduced the bill.   Sherman then wrapped his arm around his opponent’s shoulder while staring him in the eyes said, “You want to get into this? Get out of my face!”

A member of the sheriff’s department and the moderator intervened and pointed the congressmen to their seats.

Ben Fishel, press secretary at Sherman’s campaign for a year, said he has never seen a debate get so heated.

Besides discussing their stance on immigration, Sherman and Berman also answered questions about student loans, an important issue to students like Daniel Sassoon, 20, a junior at Pierce majoring in business, and a Sherman supporter.

“I agreed with Sherman’s views more than the other candidate’s…overall he seemed like a better and stronger candidate” said Sassoon.

Berman has been a supporter of decreasing student loan rates, as evident in a statement he issued after the Senate and House approved a bipartisan bill that prohibits college student loan interest from doubling.

Obamacare care was also addressed during the debate. Both agreed that it was a major step forward.