The “Burning Wall Street” exhibit goes up in flames 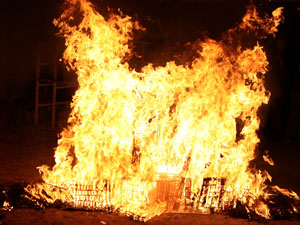 The “Burning Wall Street” installation, a miniaturized “Occupy Wall Street” made of matchstick banks, twist-ties and candy wrappers, went up in flames at its closing ceremony Saturday.

Edie Pistolesi, art education professor at CSUN, organized “Burning Wall Street” and worked on the project for more than a year with her students.

“We had to make our statement,” Pistolesi said about burning the exhibit. “The idea of burning something, an effigy, is very powerful, and burning this will be cathartic.”

This exhibit at the CSUN Art Gallery was dedicated to the “99 percent” and involved 200 students in its creation. Artist Alex Schaefer’s paintings of burning banks inspired the project.

Schaefer said he loved the fact that Pistolesi was able to see his art on the Internet and get him involved.

“I’m honored to be a part of this,” Schaefer said. “This is the coolest thing I’ve ever seen.”

Students in Pistolesi’s art classes decorated the sidewalk with descriptions of bank crimes with chalk. Phrases like “bid rigging,” “drug money laundering,” and “loan application fraud” lined the pathway where people carried the display to the burn site.

The entire installation was sprinkled with a souvenir bag of shredded money from the Federal Reserve and burned in less than five minutes.

Jennifer Perlin, a junior liberal studies major and art minor, watched the art she helped construct burn to the ground.

“It’s kind of hard to see something we have worked for go down in flames, but the symbolism was awesome,” said Perlin, 20.

Pistolesi said she made her students research the Occupy Wall Street movement and the “99 percent” before they participated in the exhibit’s construction.

“They had to understand it before doing it,” Pistolesi said.

If students disagreed or did not want to participate in the project, they had the option to complete a different assignment.

“I am going to be a teacher, and I don’t want a pink slip just because our banks are greedy,” said Jauregui, 20.

Pistolesi said she and her students added more “occupier” figurines to the display after 20,000 California teachers were laid off earlier this year.

Tania Cora, senior art education major, is a student of Pistolesi’s who helped add more “occupiers” into the display.

“I know so many people who can’t get a job even with a master’s degree,” said Cora, 24. “We’re here to inform people on what’s going on in the government.”

“This is something that engages students in political and social issues,” Sakatani said. “For students to question that through art is a great thing.”

Sakatani said the department went through all the levels of safety and risk approval for the burning, which took place in the outdoor sculpture area of the art department.