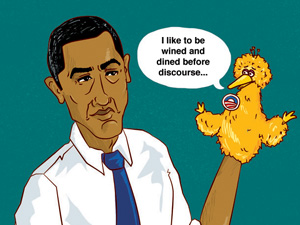 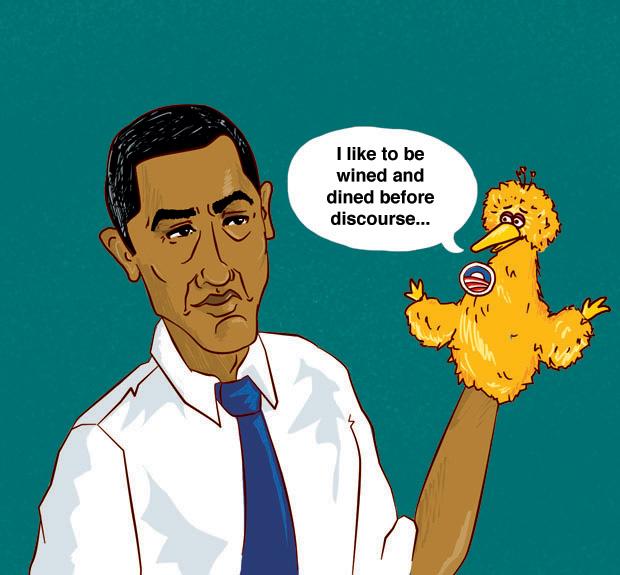 President Obama is doing quite a few things wrong in this campaign. The sad corner he’s painted himself into looks that much worse when contrasted with comments from his 2008 DNC acceptance speech.

“If you don’t have any fresh ideas, then you use stale tactics to scare voters,” said Obama. “If you don’t have a record to run on, then you paint your opponent as someone people should run from. You make a big election about small things. And you know what? It’s worked before, because it feeds into the cynicism we all have about government.”

Obama should be touting his considerable achievements from his time in office to advance his campaign: the passing and affirmation by the Supreme Court of his health care bill, the decimation of al-Qaida leadership with the successful operation against Osama bin Laden being the lynchpin, and the slow yet positive recovery of the wrecked economy he inherited from the previous bungling administration.

Instead, we get an ad featuring Sesame Street’s Big Bird that takes potshots at Romney’s debate remarks about cutting funding to PBS. It makes for an interesting attempt at spin by the Obama campaign to latch onto these comments, and while it’s played somewhat as parody, it degrades his message.

So, here he stands. About three weeks away from the the Nov. 6 elections, the polls are tightening up and Obama’s poor debate performance has seriously handicapped his campaign.

It seems more logical and substantive to address the ridiculous notion of cutting funding to PBS to reduce the deficit by $445 million, which is what was apportioned to the Corporation for Public Broadcasting by congress for 2012. While that is a large number, in comparison to the $1.2 trillion deficit for this year, it amounts to one one-hundredth of a percent in that wallowing chasm of debt. The irony of using Big Bird as an example is that most of Sesame Street’s funding comes from private donations further reducing the actual amount that gets funneled into that particular program.

The non-partisan group Sesame Workshop, which owns and produces Sesame Street, requested on their blog that neither campaign use their properties. It’s a refreshing response and absurd that the Obama campaign has to be addressed in this regard.

The ad wasn’t enough though. The Obama campaign stepped it up a notch of ridiculous by having costumed Big Bird volunteers stand outside of Romney campaign events.

Romney, rightfully so, has addressed the real issues. In an interview with Wolf Blitzer on CNN he pointed out the absurdity of the Obama campaign’s assault in our current economic climate.

“We’ve got 23 million Americans out of work, or struggling to get a full time job,” said Romney. “We’ve got one-out-of-six Americans now in poverty, 47 million on food stamps, and the President is spending his time talking about saving Big Bird.”

When Romney starts to sound reasonable, it’s probably time for the Obama campaign to take a step back and evaluate what they are adding to the noise of the election.

There is an argument to be made from both sides for what deserves cutting in our budget. That all boils down to a personal preference. PBS is important both culturally and educationally and deserves our support.

Perhaps the most interesting thing to come out of this Big Bird fiasco is a movement known as the Million Muppet March. Planned for Nov. 3, a group is planning to march at the National Mall in Washington, D.C. A coordinated, grassroots effort at bringing the importance of PBS to the forefront is a positive step in the right direction, but the Obama Campaign should latch onto other key issues and let this play out on it’s own.

The hope was there four years ago and the change has been gradual, but we all lose when campaigns engage in floundering in the absurd.

Obama needs to shy away from the stale rhetoric of small issues. He has the stats to back up a substantive campaign on the issues and yet he devolves into the tired gamesmanship that turns off so many voters. It reeks of desperation.

-Nathan is a disciple of Jim Henson. He is currently playing hide and seek with his own Muppet he got from F.A.O. Schwartz. Seriously.