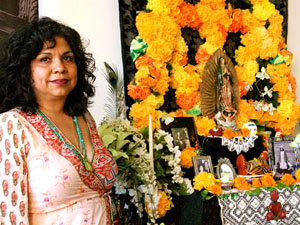 Dia de los Muertos received its own tribute as CSUN students and faculty put together a photography exhibition and musical performance focused on the Mexican holiday of remembrance.

The exhibit featured several pieces of student work in addition to the photographs provided by Jennifer Guitierrez, a performance by the CSUN Latino/a Music Ensemble and a traditional altar constructed by Rosanna Ahrens Esparza.

“I’ve been doing them all my life with my grandmother and mother. This is my first personal, big altar in a public space created by myself and it means alot to me,” said Esparza.

It took Esparza approximately two days to create her altar, which was dedicated to both her mother and her husband’s mother. She aimed to create an elegant look for the presentation, adorning the altar with photographs of her mother, fancy fabrics and lining it with candles and marigold flowers.

The marigold is abundantly found in Mexico and it was used as a guiding trail from cemeteries where loved ones were buried, all the way to the altars that families created in their memory in their homes. The scent is believed to beckon the spirit, guiding them towards the altar where all of their favorite items such as bread and prepared food dishes during life are waiting for them in addition to the company of their living relatives, said Esparza.

The event has taken place for 31 years and occurs annually, giving students the chance to share this holiday and the various cultures that celebrate it with communities that are unfamiliar to both aspects.

“(Dia de los Muertos) teaches a lot about our culture and the importance of remembering our ancestors,” said Medina. “Growing up in the United States, that (remembrance) usually isn’t stressed. It’s a tradition that we want younger students to know about because it’s very powerful. There is so much giving that takes place and you learn so much from the dead.”

The exhibit will remain in the Oviatt for the remainder of the semester, giving students the opportunity to get a closer look at the different aspects of the holiday, including the work of their peers and the photographs that Guiterrez provided from past trips to other countries. The photos reveal that this holiday is celebrated in similar fashions throughout these cultures where remembering loved ones is the focal point.

“I’m Mexican-American and it surprised me that my family doesn’t celebrate this holiday,” said Jose Leyva, a sophomore majoring in criminal justice. “It’s important to remember the things that people do in this world and the differences that they make in our lives.”

The CSUN Latino/a Music Ensemble played several traditional pieces from different cultures that revolved around death and how it is celebrated within them.

“(The exhibit) was the opportunity to present music to people who have never been introduced to this side of the culture before. That’s what drove me to perform and raise awareness of the holiday,” said Abraham Hernandez, a junior majoring in music and media composition.

Hernandez provided the musical arrangements for the CSUN Latino/a Music Ensemble and his expertise on the piano and guitar in the performance.