Daily Sundial talks to the cast of Wreck-it-Ralph 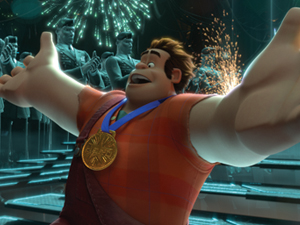 The Daily Sundial, along with other media outlets, were invited to interview the stars of Disney’s new movie “Wreck-It Ralph,” John C. Riley and Sarah Silverman! John C. Riley does the voice for Wreck-It-

Ralph, a video game villain who’s tired of being bad and wants to be a decent individual! Together he and Vanellope Von Shweetz, who is voiced by Sarah Silverman, join forces to save the arcade!This is what they had to say!

Daily Sundial: What attracted you to this movie?
John C. Riley: “Rich Moore (director) really saw me as this guy (Wreck-It-Raplh), and wanted me to bring whatever you bring as an actor in a live action movie.  That was really attractive.  The wraps on animated movies aren’t that much fun for actors, no ad libbing, never meeting the other actors, and it didn’t sound all that attractive to me.  Rich said lets have the actors in the room together, and improvise the same way as in a movie with Will Ferrell, feel as free with your acting as you would.”

DS:How were the studio sessions like?
JCR:“(With) voice work you always have more time than you need, live action movies everyone is always panicked about the sun going down, it’s just not like that with animation.  Nine times out of 10 the other actor was there and we would square off against each other across the room.  We’d do the scripted version a bunch of times until Rich got what he wanted, then it was play time and say whatever you wanted.  Lots of improvising.  Sarah is a super nimble improviser and pretty quick witted.  I needed my A-game with her. ”

DS: How did you get involved?
Sarah Silverman: “Disney approached me with this and I was like ‘Sarah Silverman?’  I was so delighted because I am a huge Disney fan, and probably would have never predicted them reaching out to me.  I’m so glad they did, the story is so great, I feel so connected to the character.  She’s this obnoxious, precocious, scrappy, tough kid, like most tough kids she’s this scared little girl underneath.  She’s protecting something with that toughness, and I think everyone can relate to that.”

DS: How was it seeing yourself animated?
SS:“It was so cool, it’s always a long process with Disney, which is why their movies are great, its not a mill, they take that time to constantly hone and rethink and tweak, the sketches change overtime and every element and moment builds layers of richness.  As the sketches change I saw her eyebrows become thick and her hair was black.  I was like ‘wow,’ it’s so extra cool to actually resemble, she looks like (what my kids would’ve looked like) if I didn’t forget to have kids.”